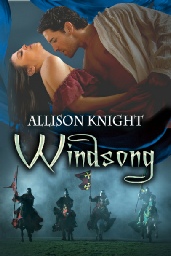 Windsong is the third in a series of Medieval Romances featuring a Welsh family who struggled to survive in the world of Edward I, Longshanks, of England.
Each book in the series is a stand alone romance. Alwyn ab Brynn Ffrydd, a Welsh prince, is the hero of Windsong. Now pledged to Edward, Alwyn desperately wants revenge against a Baron who killed his wife and unborn child, but Edward does not condone his knights battling each other to the death. Instead Alwyn kidnaps the women he believes is the Baron's mistress, avoiding the king's wrath.
Milisent Mortimore, the heroine, is a shy and retiring woman who has been held on her brother's estate for nine years. He wants her to marry a man of his choosing but Milisent was granted the right to select her own spouse, unheard of in those days, or her large inheritance will go to the church. The man her brother champions is a cruel, heartless baron who hold something over her brother's head.
Milisent finds herself at the mercy of Alwyn who insists she is a guest in his home, yet she is being treated like a servant. When attraction blooms into desire, the lovers must endure treachery, separation, and Milisent must risk her life to save Alwyn. As with any fairy tale, this has a 'happy-ever-after' ending.
Windsong | Champage Books
Windsong | Amazon

United States
Award winning author, Allison Knight claims she's married to the world's greatest husband because he's her greatest supporter and works with her on all her projects. The mother of four children, she retired from teaching to move south to warmer climes. She has written and published nineteen romances for both paperback and digital publishers. Her third medieval romance from her 'song' series...
Learn more about Allison Knight