A Funny and Romantic Novel 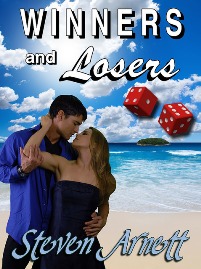 Treat yourself to a very funny new book today, with plenty of romance thrown in! As a reviewer on Amazon said recently:

This book turned out to be one of the more enjoyable reads I've had in years. It's the first fiction book I can remember that kept me up reading too late at night, and made me sorry it was over at the end. Skilfully written, lots of laugh-out-loud moments, unpredictable plot twists, and well-drawn characters. I've started a lot of fiction books in recent years and ended up quitting them, because I just wasn't enjoying them. This author hasn't forgotten that above all, a book should be fun to read.

Set in a small southern Michigan city in the early 1990s, Winners and Losers is a rollicking dark comedy starring Tom Slotrak, a young man who wins the jackpot in the Michigan Lottery and the crazy and (sometimes) adventures he has afterwards. He learns the hard way that money can’t buy happiness but that it sure can lead to some very funny and bizarre experiences!

At the beginning of the story, Tom is 26 but feels older because he’s bored with his life and feels rootless. He’s engaged to Erica Wonders: She’s smart and good looking and doesn’t treat him too badly, but Tom is bored with the relationship and doesn’t really love her anymore. He’s thinking about how he might be able to break off the engagement without all hell breaking loose. Though Tom is engaged to Erica, when he’s at work he has a hard time keeping his mind and his eyes off clerk and administrative assistant Lena Coffee. Sexy, flirty, and funny, Lena is Tom’s fantasy woman. Rumor has it that she has a boyfriend in a motorcycle gang, but she is just flirty enough and just nice enough to Tom for him to believe it’s not quite impossible that he and Lena could hook up. They end up having a secret affair.

However, Tom gets laid off from his job as an accountant at Allied Nuclear Corporation after a plant closing. He soon runs out of money and tries to find a new job but without much luck—eventually having to settle for shoveling manure for minimum wage at Meadowlark Farms. Erica is fed up with him, and it seems as if he’ll soon hit rock bottom. He’s down to his last $17, and even though he knows he shouldn’t, he buys a ticket for the Michigan Lottery at Joe’s Gas Mart. He barely makes the effort to check his ticket again the winning number when it’s announced on TV, but when he does, the seemingly impossible happens: His ticket matches the winning number!

Erica is absolutely thrilled, but Tom isn’t as happy as might be expected after such a turn of good fortune. With Tom tagging along, Erica goes on a giant spending spree. When he’s not shopping with Erica, everybody on planet Earth, it seems, tries to hit him up for money. The fortune has made Tom’s alienation from Erica worse, and he ends up breaking off the engagement. The end of his engagement makes him much sadder than he ever would have imagined, but he at least hopes it will be the beginning of a new life for him. Before he even has a chance to think about what he’ll do in the future, though, Lena calls him to tell him her boyfriend found out about their affair and is threatening to kill Tom, so he decides to leave town with hardly a moment’s notice. Now that he has so much money, he doesn’t necessarily think that’s such a bad thing, and he makes his way to Florida after an adventure at a hillbilly bar in Tennessee.

Tom ends up in Key West and thinks he’ll like it there, but he gets a shock when he goes to an ATM and is refused a withdrawal. Before long, he learns that Erica has sued him claiming the winning ticket really belonged to her and that a judge in Michigan has frozen his bank accounts! Broke again, Tom must again go out and look for a job. He hires in as a salesman at Florida Guano, where he meets secretary/receptionist Honey Sweetwater. All she seems to do at the office is work on her nails and looked bored. Tom soon finds, however, that she has pretty, mischievous eyes and a great sense of humor. Before long, the two of them are going out together and having a great time. Tom’s career at Florida Guano skids to a halt pretty quickly, but Tom and Honey have quite an adventure when they are invited to the Gothic mansion of Mr. Fabulous, the mysterious billionaire owner of Florida Guano.

Finally, the case of Wonders vs. Slotrak goes on trial, and Tom returns to Michigan. A legal battle to end all battles ensues, and Tom knows that the whole rest of his life. Will he end up rich and living a dream with Honey or will he end up right back where he was after he lost his job at Allied Nuclear?

Steven Arnett was born in Detroit, Michigan, in 1951 and enjoys writing fiction and poetry. He attended Michigan State University and the University of Maine. He currently lives in Luxembourg with his wife, Delphine, and daughter, Vivienne.