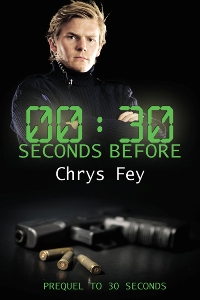 Blake Herro is a cop in the Cleveland Police Force. Ever since he was a child he wanted to do right by the city he loved by cleaning up the streets and protecting its citizens. Red, a notorious mobster, has other plans.

On a bitter December night, ten police officers are drawn into a trap and killed by Red’s followers. Blake wants to bring down the Mob to avenge his fallen brothers and to prevent other cops from being murdered. Except the only way he can do that is by infiltrating the Mob.

Every minute he’s with these mobsters he’s in danger. Around every corner lies the threat of coming face to face with a gun. Will he make it out of the Mob alive or will he be their next victim?

30 Seconds Before, a mainstream-thriller novella, is the prequel to 30 Seconds.

Chrys Fey is the author of the Disaster Crimes Series, as well as these releases from The Wild Rose Press: 30 Seconds, Ghost of Death, and Witch of Death. She is an administrator for the Insecure Writer's Support Group and heads their monthly newsletter.

When Fey was six years old, she realized she wanted to be a writer by watching her mother pursue publication. At the age of twelve, she started writing her first novel, which flourished into a series she later rewrote at seventeen.
Fey lives in Florida and is always on the lookout for hurricanes. She has four adopted cats... more

Other books by Chrys Fey