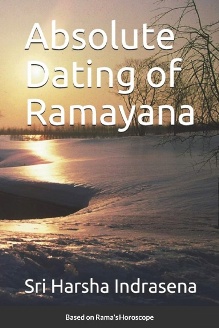 This is the first and the only book that gives the horoscope of Rama as it is given in the epic Ramayana. The reader will be amazed to see this because many eminent authors attempted in the past to find this but failed. Ultimately, the conclusion of many of the previous researchers was that the horoscope details of Rama were fictitious and interpolations. Not only the horoscope details but also the eclipse details in the epic are verifiable. The reader will find that the epic Ramayana is indeed a true record of South Asian history.

Ramayana is probably the most ancient extant writing in world literature. It must have been written during the time of Rama within a few years of -5300 CE. If it had not been written then and there when the events happened, it would have been extremely unlikely to have the astronomical events reported with such accuracy. We know that even with presently available sophisticated planetary theories, it is impossible to precisely give the ephemeris and eclipse details in 6th millennium BCE. If that is the case, it is extremely unlikely that Valmiki or somebody else would have back-calculated the astronomical events and recorded in the Ramayana several centuries or millennia later. For this reason, it can be concluded that the astronomical events in the Ramayana were naked-eye observations and Panchanga calculations done in 5300s BCE. Therefore, arguments like ‘birth details of Rama are interpolations of much later time’ are not tenable. Even today, we are not in a position to back-calculate ephemeris and eclipses in 6th millennium BCE precisely.

Another argument is that the Indians were not aware of the constellations and planets other than the sun and moon in the distant past. Many researchers think that the twelve-sign zodiac was introduced to the Indian subcontinent only in 500s CE. They often quote Rigveda (1400 BCE) to support this claim. They do not believe that Ramayana could have been written earlier than 7th century BCE. As explained above, it is virtually impossible to write Ramayana in 700 BCE incorporating astronomical events that had taken place in 6th millennium BCE.  On this ground, it is necessary to drop the claim of many researchers that ‘before the Christian era 12-sign zodiac was not in use in South Asia’. In fact, the history of astronomy goes back to at least the 6th millennium BCE!

Ramayana provides strong astronomical evidence to prove the historicity and the dating of the Rama - Ravana War.

Hairy Humanoids from the Wild