Be Different: Finding the Resilience to Lead 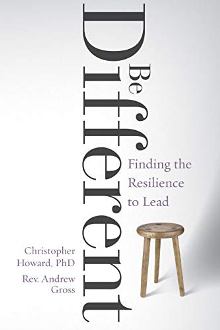 Why do some Christian leaders handle life’s pressures with resilience, while others fail miserably under the same pressures?

Dr. Christopher Howard, an associate professor of business management at Pfeiffer University, examines this question in Be Different: Finding the Resilience to Lead (Kindle Direct Publishing), a new book he has co-authored with Rev. Andrew Gross, the associate pastor at Bethel Christian Fellowship in St. Paul.

Be Different is written in a lively, accessible style. It draws on Howard’s past research into leadership resiliency, and each of its chapter beginnings uses a different episode from a fictional story to introduce and illuminate various concepts. The story recounts what happens after Petr Wolansky, the busy pastor of a prosperous church in suburban Indianapolis, flees home and family in response to personal and ministerial challenges.

Petr’s whereabouts are unknown when the story begins. Jennifer, Petr’s wife, and Alfonso, his friend, know only that Petr has left behind a note threatening to commit suicide two days before his 45th birthday.

“Why was Petr in trouble?” the book asks. “What was he missing that made his trials so hard for him?”

Be Different argues that what was missing (in Petr and others like him) was a biblical differentiation of self, a kind of Christian twist on differentiation, a term that Murray Bowen, the noted therapist, coined about 60 years ago.

After defining biblical differentiation, in the second section of the book, we get very pragmatic, offering research-based advice in several areas. The first area of developmental antecedents is Developmental Assignments; here, we unpack such obstacles to effective leadership as increased responsibility, working with people from other cultures, and major change implementation in your organization. The second area is Developmental Experiences; here, we look at persevering through perceived or real professional barriers. We also explore ways of overcoming such factors as traumatic or negative emotionally laden life experiences, challenging childhood experiences, and personal mistakes. The last two areas are Developmental Training and Developmental Relationships. United States
Christopher S. Howard, PhD, is Associate Professor of Business Management and Leadership at Pfeiffer University in North Carolina. In addition to his teaching of undergraduate and graduate courses in leadership, followership, and group dynamics, he has conducted a line of research on leadership formation that includes hardships, resilience, and character. This follows extensive experience and...
Learn more about Christopher Howard