Into a Darker Place
Book by Sean Catt 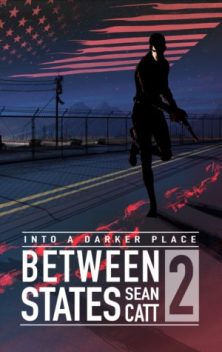 THEY SAY CATS HAVE NINE LIVES

However, cougar shapeshifter Jake Palmer has just the one, and he doesn’t intend to go down without a fight.

Picking up from where the first book in the Between States shapeshifter series left off, author Sean Catt once again hauls us out of our cosy, familiar world, and pulls us down into the dark, shadowy world inhabited by shapeshifters.

Convinced the dangers they faced during their trip from Utah to California are all behind them, Jake and Billy embark on a ‘get away from it all’ road trip up to San Francisco. However, their world is about to be turned upside down once again.

In a hail of deadly gunfire, Jake is snatched by a crooked bio-tech company willing to go to any lengths to create hybrid human soldiers using shapeshifter DNA.

Held captive in an underground research facility in New Mexico with violent human test subjects who know only how to kill, and keep killing, Jake realizes he has to break out, and soon, as it becomes clear to him his life expectancy is limited.

However, things are just about to get even worse for the unsuspecting shapeshifter, as a CIA assassin is heading his way.
Sent by the head of  the covert CIA black ops unit Jake works for, the asset has orders to kill Jake to prevent him disclosing the unit’s existence.

Jake has one more problem …
Can he stay alive long enough to find a way out?

United Kingdom
Sean Catt is a UK based Fantasy and Anthropomorphic fiction writer who also loves writing the odd dark/horror short story when the lights are turned way down low and the night closes in. He has been the Vice Chair of a writers group helping to provide encouragement and support to both new and established authors, one of the directors of the 2015 Eastbourne Book Festival, and is a member of...
Learn more about Sean Catt