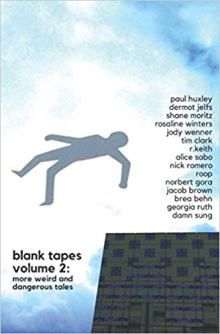 'blank tapes' returns with 17 new weird and dangerous tales. This is not a typical collection of stories. If you feel discomfort, uneasiness, a sense of disassociation and mild paranoia after reading these stories the publisher cannot be held responsible.

'blank tapes' is a challenging and daring mix of poetry, experimental fiction and short stories with dark themes. It is not for the faint of heart, weak of bladder and narrow of mind. Inside you will find missives from the outer parts of human experience, and a few from beyond that, which have slipped through the cracks in reality to find their way into your hands.

Paul Huxley was born in Northampton, England and at the age of nine, moved with his parents to the south of France where they lived for five years. It was here that he found his passion for books, having discovered an English language library tucked away in a small rural village.
Having worked in film (in which he still dabbles), with several features and shorts in production, Paul ventured into fiction.
In 2017 Paul established Twin Monocle Publishing to release new and exciting genre stories from talented writers.
He lives in Sheffield with Elizabeth, Harrison, Eloise... more