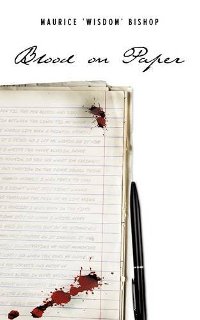 Blood on Paper is an emotional and heartfelt poetic pieces that ministers the gospel of Jesus Christ to the hearts, minds, and souls of the urban youth. Maurice 'Wisdom' Bishop powerful and poetic words takes you on a journey of his past experiences, the lives of others, and illustrating stories to show you God's love for us; as well as those who reject him. His powerful and anointed words will cause you to examine your own life and make a decision that will change your life forever.
This poetry book is very unique and the poetic rhymes flows out your mouth when you read. There are interesting and controversial topics that many are afraid to write about but is written by Maurice Wisdom Bishop. His compelling stories and experiences are based on real dreams and events in his life. His poetic masterpiece and detailed poems actually creates images in your mind so you can see the whole picture of his experiences. This book is one of a kind and your eyes will be glued to every page, so it will be hard to put the book down.
Blood on Paper - Available from Amazon
Maurice Wisdom Spoken Fan Page

I deployed in Iraq for 13 months. While I was there a soldier in my unit shot himself with an M-16 and the 5.56mm round hit him in the quadrum of his heart and he died. I felt so much guilt because I was one of the soldiers that made fun of him and I blamed myself. I was very effected and hid my emotions inside.
After deployment my ex baby mama called me unexpectedly after 11 months of not talking to me and told me my 1year old son died and never even told me about the funeral. I became angry and my heart grew cold. I had nightmares from my deployment and my dead son and couldn't... more