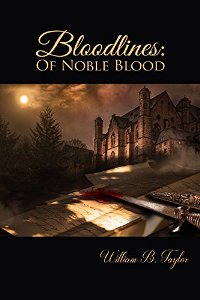 Newlyweds Alex and Maggie travel to England and uncover a DNA match involving one of England's great noble families. At stake is a noble title and a vast family fortune...a fortune that the family will not hand over without a fight, to the death if necessary! "Bloodlines: Of Noble Blood" is a story about wealth, power and MURDER! A fast-paced mystery that will keep the reader guessing until the very end. Full of twists and surprises, "Bloodlines: Of Noble Blood" is an engaging and entertaining story. This is the latest in the Bloodlines Series following the successful Bloodlines: Cove Point Manor release in February, 2017.

William Taylor was born and raised in Southern Ontario, believing he was 100% English/Canadian until he began to journey into his ancestral past. As he began his journey, many historical figures began to appear in his direct paternal lineage; a lot of these ancestors turned out to be quite surprising. Some of the surprises included a direct bloodline to Scottish and English nobility, but even bigger surprises included finding very well known American family members, dating back to the Puritans who first arrived in Massachusetts in the early 1600's. From this Puritan bloodline, William... more