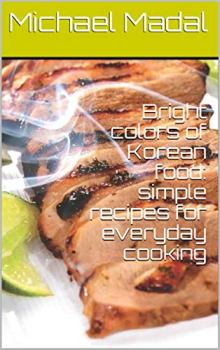 right colors of Korean food: simple recipes for everyday cooking. It is an easy guidance for those who are interested to cook traditional Korean dishes even if you are not sophisticated in cooking. For convenience of readers all the recipes are broken down by sections including appetizers, soups & salads, main & side dishes, desserts.

One could hardly meet a more diverse cuisine than Korean. Combination of dishes can just be incredible for US person or a European. For example, pickled sprouts, sweet nuts, seaweed and salted dried tiny fish can be served with a beef soup simultaneously. In my opinion it is an incredibly fascinating thing. Another example of exotic stuff is they like to sprinkle tomatoes and cucumbers with sugar. However when I suggested my local friends to sprinkle it with salt, they looked at me as I was a psycho.

Meantime Korean cuisine looks very healthy, at the expense of a variety of snacks one can get so many vitamins and minerals for one meal! It includes greens, seaweed, germinated grains and seafood as well which is one of the main components of Korean food.

Unfortunately many Koreans, mostly young people, began to eat less traditional food and more burgers due to the advent of fast food. The number of overweight people among the youth and even children has increased dramatically in recent years. Whereas there’s a very low chance to meet overweight people among the older generation. I think I have not seen anyone. What again says about the balance and healthiness of traditional Korean cuisine.

However its value is not only in healthy stuff. It can be a nice variegated supplement to your traditional daily meal. Even a couple of spicy vegetable salads could give zest to your menu and surprise your loved ones in a good sense.

Russian Federation
Michael Madal is the creator of Bright colors of Korean food: simple recipes for everyday cooking. He grew up in Sakhalin island, Russia, the place where a huge Korean expat community exists and its cuisine is an essential part of local culture. The cooking recipes were gladly revealed to him by his friend’s grandparents after Michael had performed a ballroom dancing master class to them....
Learn more about Michael Madal