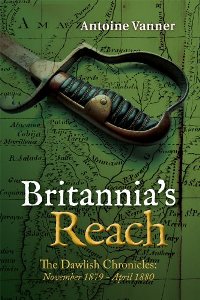 1880. On a broad river deep in the heart of South America, a flotilla of paddle steamers thrashes slowly upstream. Laden with troops, horses and artillery, intent on conquest and revenge.

Ahead lies a commercial empire that was wrested from a British consortium in a bloody revolution. Now the investors are determined to recoup their losses and are funding a vicious war to do so.

Nicholas Dawlish, an ambitious British naval officer, is playing a leading role in the expedition.  But as brutal land and river battles mark its progress upriver, and as both sides inflict and endure ever greater suffering, stalemate threatens.

Britannia’s Reach continues the story of Nicholas Dawlish, first introduced in Britannia’s Wolf.  The Royal Navy he joined as a boy, when it was still commanded by veterans of Trafalgar, is in feverish technical transition, and there are opportunities aplenty for the daring and the innovative.  But is the price of advancement too high?

Further books will accompany Dawlish on his further voyage into the future.

United Kingdom
Antoine Vanner has survived military coups, a guerrilla war, storms at sea and life in mangrove swamps, tropical forest, offshore oil-platforms and the boardroom. He has lived and worked long-term in eight countries, has travelled widely in all continents except Antarctica and is fluent in three languages. He has a passion for nineteenth-century political and military history and has a deep...
Learn more about Antoine Vanner