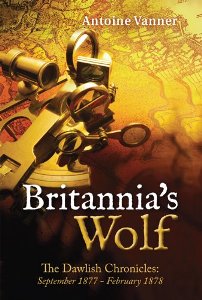 Britannia's Wolf is the first novel in the Dawlish Chronicles series. It is set in 1877 when the vicious Russo-Turkish War is reaching its climax.
A Russian victory will pose a threat to Britain’s strategic interests. To protect them an ambitious British naval officer, Nicholas Dawlish, is assigned to the Ottoman Navy to ravage Russian supply-lines in the Black Sea. In the depths of a savage winter, as Turkish forces face defeat on all fronts, Dawlish confronts enemy ironclads, Cossack lances and merciless Kurdish irregulars, and finds himself a pawn in the rivalry of the Sultan’s half-brothers for control of the collapsing empire. And in the midst of this chaos, unwillingly and unexpectedly, Dawlish finds himself drawn to a woman whom he believes he should not love.
Neither for his own sake, nor for hers…
Britannia’s Wolf introduces a naval hero who is more familiar with steam, breech-loaders and torpedoes than with sails, carronades and broadsides.  Dawlish joined as a boy a Royal Navy still commanded by veterans of Trafalgar but he will help forge the Dreadnought navy of Jutland and the Great War.
Tee next book in the series, Britannia's Reach, was published early in 2014 and the third book is due at the end of the same year.
Buy on Amazon
Britannia's Wolf | Amazon (Paperback)
Dawlish Chronicles Website
ISBN:
978-1480275270

United Kingdom
Antoine Vanner has survived military coups, a guerrilla war, storms at sea and life in mangrove swamps, tropical forest, offshore oil-platforms and the boardroom. He has lived and worked long-term in eight countries, has travelled widely in all continents except Antarctica and is fluent in three languages. He has a passion for nineteenth-century political and military history and has a deep...
Learn more about Antoine Vanner