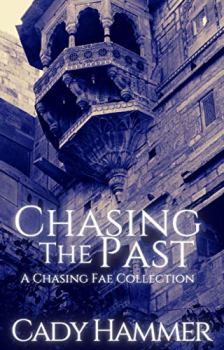 From the universe of Chasing Fae, this short story collection highlights three characters from the House of the Evening, a lorddom of the nightlife, music, and art. Each of these characters represents an important part in Grace Richardson’s past and future.

- A Chance Meeting:  When Amelia, Grace’s future mother, meets Alexander for the first time, she is intrigued by his mysterious appearance and his disdain for the art she loves so much. She works to teach him the joy of creating and ends up learning a little bit about seizing life herself.

- Taking My Place: Elise may not be as high ranking of a girl as the other daughters of the men her father works with, but she plans to find and take her place in the House of the Evening no matter who gets in her way.

- Coming To Terms: Grace’s half-brother, Neil, has never had to compete for anything. As the heir to the House of the Evening, he will inherit everything to make his own. But when his father brings home a bastard daughter, his world gets thrown into a tailspin.

Buy on Amazon
Chasing The Past | Other Ebook Retailers United States
Cady Hammer has been a writer for most of her life. From the time she was eleven years old writing her first novel between classes, she always looked to the world to bring inspiration. She was often teased for being in her own world, but never hesitated to invite others along on the adventure. She now spends her time at the College of William and Mary pursuing a Bachelor of Arts in History...
Learn more about Cady Hammer