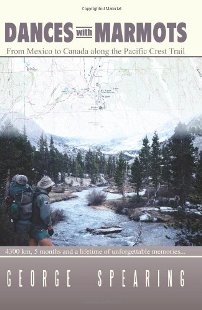 George Spearing decided to take 'leave of absence' from his job as a firefighter in Auckland New Zealand and hike the Pacific Crest Trail. This is the inspirational story of his journey. Beginning at Devonport Fire Station in New Zealand, it follows his 2650 mile progress from the Mexican border and up into Canada. Traversing the desert areas and snowbound Sierra Nevada range of California, the Cascade ranges of Oregon and Washington and emerging in the Okanagan Forest of British Columbia, Canada.
The tale, often with some humor, tells of the characters and wildlife met along the way and his impressions of America and its National Parks and Wilderness areas.

George Spearing was born and educated in the UK, spending two years as a cadet at the shore based naval training school HMS Conway before going to sea at age sixteen.
Emigrating to New Zealand six years later, he worked at a variety of jobs before joining the New Zealand Fire Service in which he served for twenty seven years in the Auckland Brigade, retiring with the rank of Station Officer. He now lives in Oamaru, South Island, NZ.
Outdoor experiences include sea kayaking. Parachuting. Cycling 'off road' across Australia’s Nullarbor Plain. Summiting NZ's Mt.Cook/Aoraki.... more