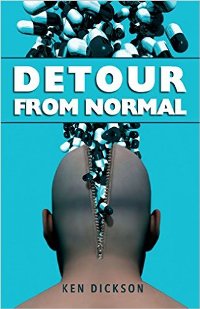 Before April 14, 2011, Ken Dickson lived a life indistinguishable from those of other residents of his Phoenix suburb. The normally healthy fifty-five year-old held a regular job, and lived with his loving wife, two teenage daughters, and an assortment of pets. On that mid-April day, though, the course of his life forever changed when he learned he must undergo surgery to remove a damaged portion of his lower intestine. A fluke injury unknowingly inflicted days earlier while he was working in his yard had resulted in an unseen infection that damaged his intestine beyond repair.

The life-saving surgery and associated medications become catalysts for an unbelievable chain of events that cause the formerly mild-mannered man to spiral into the chaotic mental illness known as mania. Dickson is then subjected to a whirlwind of trips to emergency rooms, hospitals and ultimately, psychiatric facilities. While there, he is given additional medications that further seal his fate plunging him deep into an inescapable abyss of mental illness.

Part medical mystery, and part psychological thriller, Dickson’s creative nonfiction memoir, Detour from Normal, demonstrates how even the most seemingly normal life can implode in an instant. It is a riveting account of undying love and brutal anguish, of lies and arrogance, and of unforgettable characters and desperate actions.

In an age when there is utmost concern about the quality of mental health care, the timing couldn’t be better for this informative and inspirational memoir. Told from the real-life perspective of someone with mental illness, readers will observe first-hand the adverse reactions to medications, misdiagnoses, improper treatment, and other factors that work together to send Dickson spiraling into a seemingly inescapable hell.

Despite overwhelming obstacles, Dickson struggles bravely to reclaim the life he has lost. His journey proves to be a perilous one of unexpected discovery, and from its foretelling opening pages to its unpredictable climax, it never ceases to be fascinating, enlightening and thought provoking.

Detour from Normal is available in both paperback and eBook. Since its release in December of 2013, over 10,000 copies have been sold in 16 countries around the world.

Detour From Normal - Available from Amazon
Book page on GoodReads

United States
Ken Dickson is the author of Detour from Normal, the true story of a respected engineer and devoted family man who was committed to a high security psychiatric ward as a result of surgery. Ken lives in Phoenix, Arizona with his wife and assorted pets. He strives to share stories of conquered adversity and personal growth to inspire readers to live more passionate and fulfilled lives.
Learn more about Ken Dickson