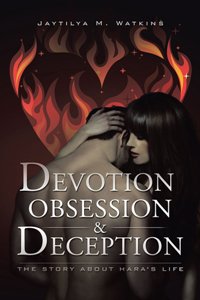 The novel is about a high school graduate named Hara Weatherson who enrolled into Texas State University in San Marcos, Texas where she gets back into a relationship with her ex-boyfriend, a university football player at Auburn University in Auburn, Alabama.

She will also become best friends with a fellow classmate of hers that's a guy. He will become obsessed with her and plot to break her and her boyfriend up but once the plot backfires. He will take dangerous measures to keep her near him forever.

United States
Jaytilya M. Watkins is a 29 year old self published author who was born in 1985. She also has the talent to write songs, rap, and draw. She published her first nonfiction novel titled, "The Misunderstood African American Female" in June of 2014 and her first fiction novel titled, "Devotion, Obsession, & Deception," in December of 2014.
Learn more about Jaytilya M. Watkins