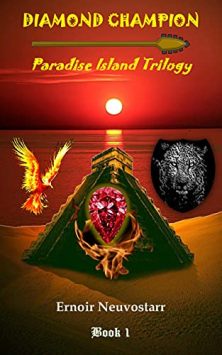 Paradise Found is a story of adventure, action, exploration and romance. It is set around the 16th Century, the age of exploration, based loosely on the European conquest of South America.

Long ago on a tranquil tropical island, a community of villagers were enjoying their daily, carefree lives. That was until a group of explorers arrive on their shores. They have travelled from afar and looking for treasure. Will there be peaceful trade negotiations? Will the explorers find any secrets to the island? Whatever happens, life will never be the same on the island that is called paradise.

On a sun-drenched, tropical, volcanic island, a group of villagers enjoy their peaceful lives in paradise. Some take it for granted whilst other cherish the beauty. Everything was perfect. Until one day a ship of explorers from a faraway land, in search of gleaming treasures, arrived on their pristine golden shores.

The islanders are interested in exploring new opportunities and working with the Conquistador and his men. But the natives are not prepared to blindly accept strangers and reveal the secrets to their island. Meanwhile, the explorers are attracted to the resources the place can offer and suspect there are hidden gems and that there is more to the island than meets the eye.

Action, Adventure, exploration and romance all collide on Paradise Island.

In recent years, I had developed an interested in writing a book. At work, we had a bookworm who always seemed to be glued to a book. During my English lessons at school, I had already developed a passion for reading books. Following this rekindling of my interested in literature, I decided I wanted toe write a book.

Hence, Paradise Island was penned. I believe this is just the start of my authoring days...

United Kingdom
I practice in the art of historical fiction, particularly in ancient medieval bygone times. I hope you are a fan of my trade and in return for your support, I will endeavour to mould more tales of action, adventure and romance, which may be able to satisfy you desires to consume more epic folktales! I am a Chinese-British national who has lived in the UK since I was a kid. Living in the...
Learn more about Ernoir Neuvostarr