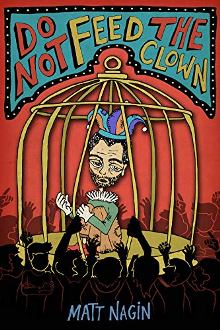 “Do Not Feed The Clown” is a humor collection, consisting of 34 short works, that highlight the absurdities of our socio-political climate. It further tackles the mayhem of our news cycle and the inconsistencies of cultural norms. This is a countercultural book, a bit of a challenge to the system, but in a lighthearted way and in the tradition of the court jester. While there are many humor books of this type on the market, this book stands out because of the wide range of topics covered and the precision of satirical analysis. Finally, the author, Matt Nagin, had his work banned from Funny or Die, which, let’s face it, is all the more reason for you to read this book!

Covering all the important topics for 2019/2020 including:
--Insensitivity Training At Dunkin’ Donuts — In response to the Sensitivity Training at Starbucks, a new course is offered at Dunkin’ Donuts that trains employees to be politically incorrect and insensitive as all hell.
--Letters From The Management — Cultural accommodation runs amok in this series of letters from a management company to tenants of an East Village apartment complex, following a series of destructive acts associated with crazed voodoo practitioners.
--Go Fund My Extraterrestrial Lawsuit — An alien abductee, who was given an anal probe in a distant galaxy, requests 12 trillion dollars to pay for an intergalactic flight to The Whirlpool Galaxy where he intends to sue the perpetrators who stole his innocence.
--Roasts Gone Bonkers — A roast of Mrs. Piggy? Kenny Rogers? Hitler? God? Strap in!
--Zombie Apocalypse Insurance — A rapidly growing insurance outfit begins offering Zombie Insurance packages — a move that suggest we’re all taking this zombie threat a bit too seriously.
--The Secret Diary Of Tim Cook — A gold iPhone. The removal of the headphone jack. Producing phones that don’t work and then overcharging for repairs at The Genius Bar. Innovation at Apple continues just as it had under Steve Jobs!
--Yelp Reviews Of The Crucifixion — Between the haughty beer wenches, the three shekels for front row seats, and the failure to cook Jesus on a gridiron — at least one reviewer was quite upset with his crucifixion experience. Yes, Yosef. R., gave it one star, and suggested the viewer find some other means of entertainment — such as writing an epic poem in the style of The Aeneid, or stabbing yourself in the chest with a poisonous spear.

Other books by Matt Nagin

Looking for an Excellent Self-Publishing Platform?

Get FREE Formatting, Publishisng, Promotion Tools and Sales Tracking. All in One Place!