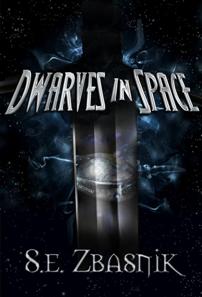 Thousands of years after the jewelry's destroyed, the sword reforged, the dragon ridden, and the indecipherable prophecy translated into a recipe for sugared biscuits, the dwarves turned to that final frontier: space. And along came the elves, orcs, gnomes, trolls, ogres, and those vermin-like upstarts, humans.

Dwarves in Space is Tolkien merged with Hitchhiker's Guide to the Galaxy in a horrific transporter accident.

Captain Variel Tuffman, the proprietor of one repurposed ancient cruise ship, has a secret. One of those change your face, change your name, change your socks kind of secrets. She’s kept it at bay for five years by keeping out of human space but it’s all about to go pear shaped thanks to a third technician.
Segundo, Quito is what it says on his name tag but he wasn’t born with that name, nor was he even called it most of his life. Segundo is a fresh faced idiot recently apprenticed into the exciting life of bureaucratic oversight, but he was raised in a mystical Prophet School. As the not chosen one, Segundo finds himself stumbling through a galaxy he knows nothing about while at the mercy of the hands on the Elation-Cru who accidentally kidnapped him.

The pilot of the illustrious, glorified tin can is Orn Lidoffad; a dwarf with a debilitating sugar addiction. He’s technically Variel’s right hand man despite missing his own right hand. If you want the best pilot in the galaxy you best be looking somewhere else, but Orn’s never parked a ship near a black hole or pinched the wyrm into the middle of a planet, so he’s got that going for him. He’s married to the ship’s engineer, the frosty elven Ferra. Getting on her good side is nigh on impossible, but you never want to be on her bad side. At least not without sleeping with one eye open at all times.

As if kidnapping a technician on accident isn’t enough, Variel’s past drops on her head when a Knight —the human force who answer to no one — starts asking about her ship. Running across the galaxy, surviving firefights, infiltrating an Orc homeworld, and battling a Knight to the death; it’s all in a days work for Variel Tuffman, whether she likes it or not.

United States
S. E. Zbasnik has a degree in genetics, which means there may or may not be a horde of monkeoctopi doing her bidding to take over the world. Bringing that scientific approach to the fantasy world is her game, trying to put some common sense into magic and magic into common sense. She currently lives with her husband and beloved dog, who dress up like Sherlock Holmes and solve mysteries in...
Learn more about S. E. Zbasnik