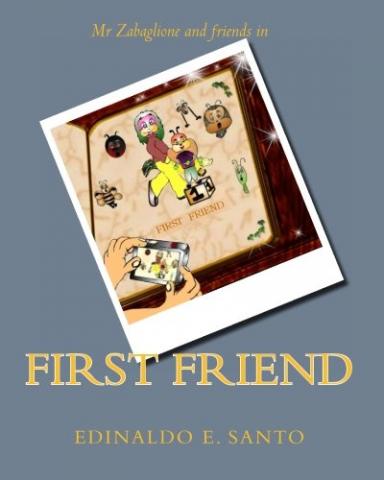 ‘ZABA’ is the youngest of a hatch of three chicks, but he is so small, weak and fragile that he needs special attention. Because he is still too small and can’t fly, Father and Mother Bird have to leave him at home, while they take the older chicks to have flying lessons. One day, while the family is out and the chick is resting, a careless firefly called ‘TICKLE’ flies to their nest and finds himself in a very difficult situation.
The smart firefly fearing for his life, decides to tell the bird he has an important message to his parents. He truly believes the small chick lacks life experience, but for his surprise, he discovers that the little bird is cleverer than he thinks and falls for the little chick’s trick. Suddenly the family is back and the firefly’s only chance of escaping alive is the chick, which quickly picks the firefly up and hides him under his wing. The whole family is now at home, but Father and Mother bird are having an argument, while the little chick watches the scene shocked and also scared. When the little bird wakes up on the following morning he finds himself alone again. Even his friend is not there anymore. It is when he decides that it is time for him to leave the nest and start to explore the world around him, but enchanted by the beauty of a butterfly he loses his balance and falls from the tree, painfully reaching the ground. He is away from home and doesn’t know how to get back.
At this moment, a familiar voice comes for his comfort and rescuing. The happy firefly appears from nowhere to return the favour of the previous night and shows to the little bird the way home. Grateful for saving his life, the firefly teaches the small chick to believe in himself, while praising him for his achievements. He encourages the chick to find his strengths and to learn his weakness in order to get what he wishes. They are friends and their friendship is bonded in trust, encouragement, support and respect. They don’t know much about each other, but they know they can count on one another to go through difficult moments and they are learning how precious and priceless friendship is. They know they will meet again and live many adventures together, but it is time for the little chick to go back home and he flies beautifully through the sky, as he now has enough confidence and knows he can’t give up trying, if he is to achieve whatever he wants.
Buy on Amazon

United Kingdom
Edinaldo E. Santo is a Brazilian Portuguese teacher, interpreter and translator in the UK with more than 20 years experience in the UK and abroad.In 2011 Edinaldo founded his own company called London Lessons Ltd, teaching Brazilian Portuguese to English speakers and foreigners. He also wrote and  illustrated two children's picture books.In 2013 he published eight of his 15 short grammar...
Learn more about Edinaldo Santo

Until We Meet Again

I Will Always Love You

Who's In Our Woods