From King to Obama

Witness to a Turbulent History 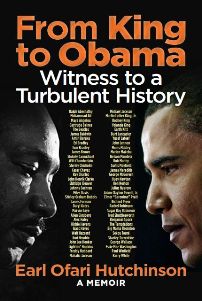 In his new book From King to Obama: Witness to a Turbulent History. Hutchinson takes the reader on a fast paced, highly readable, and enjoyable remembrance of those times. He gives a you are there sweeping feel of events from Dr. King’s civil rights battles to the entrance in the White House of President Obama.

From King to Obama: Witness to a Turbulent History seeks to convey the exhilaration the author feels at having walked in the shadow of history of a Dr. King, a Miles Davis, a John Lennon, a Bob Marley, and many others. Hutchinson’s mission is to make the reader feel the exhilaration he felt meeting the people whose monumental accomplishments affected the lives of millions over a half century from the mid-1960s to the first decade of the 21st Century.

Earl Ofari Hutchinson is a nationally acclaimed author and social issues commentator. He is a syndicated columnist and a feature contributor to the Huffington Post. His columns have appeared in the Los Angeles Times, Newsday, Washington Post, Christian Science Monitor, Chicago Tribune, Baltimore Sun and the San Francisco Chronicle.

Hutchinson is the author of ten books on race and social change in America. He is the National Political Writer for New America Media and the Los Angeles Wave Newspaper. He hosts two syndicated public affairs and issues radio talk shows on KTYM Radio and... more