From Rio to Uman 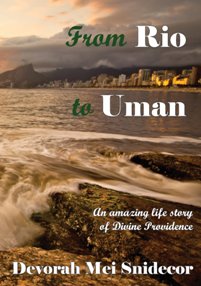 A wonderful Adventure, Biography and a Spiritual journey.. from the book: The Adventure of a Lifetime Guided by Truths from beyond! Now for the rest of the story... http://fromriotouman.wix.com/dmss

From Rio to Uman tells the amazing life story of a girl who was searching for the "real deal", the absolute true G-D. She grew up with the knowledge that there was something beyond that we can see or sense. Her life changed drastically when a prophetic dream came into fulfillment disclosing her Jewish background. This book reveals the mind-boggling Divine miracles which surrounded her life from the moment she was born till this very day. It tells of her struggle for acceptance, her pain of family rejection but also of her moments of joy and her prayers to save the rest of her family. This is the story of a woman of great strength and a deep sense of Emuna - faith in her G-D, the G-D of Israel. From the story of her life and the length of the path she chose, we can see, feel and sense the days of Moshiach in which "G-D settles the solitary into a household" and returns all distant souls to Judaism and to Israel. Rebbetzin Myriam Attias Beith Shemesh-Israel.

"From Rio to Uman" is already available in Spanish and Portuguese is being uploaded at this moment.  Hebrew edition will be on the market around April or May next year.

Devorah Mei Snidecor is a Brazilian author, born in Rio de Janeiro, into a Portuguese Banker family, lived as a child for a few years in Argentina, her mother's home, from where she kept her most sweet an loving memories. Two years after the death of Evita Peron, the land became a boiling pot of insecurity and her family decided to pack and to fly back to Rio. Her life apparently became normal, and once again she was saved of the bite of a most venous serpent who was killed "accidently" by Devorah, still a 10 years young girl. She finished her secondary school , at a French Catholic... more