Archetype of the Stars
Book by Janit Gambhir 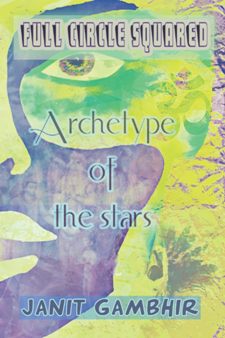 A story about ancient stars from the Indian pantheons shared with mythology.

The beginning of creation is at hand, the Earth is readied for life, but the kingly stars and gods are yet at battle-stations for another war with giants. This time for the champion god of the Earth, and to this task Agni, the god of fire is summoned at helm.

Agni, originally the star Beta Taurus, is the youngest god on Earth of the old era. Of his make is also one of the greatest love stories with Swaha, the star Zeta, and a neighbouring star to constellation. Swaha is also known to mythology as the holy word offered to the fire as rituals in Sanskrit even today.

The greatest love story however is in the keep of the Sage Vasishta and Arundati. Vasishta, who is otherwise known as the star Mizar, of the Great Bear in the sky, the constellation Ursa Major. Ursa Major known to the Indian pantheon as the seven heavenly sages of the 'Sapta-rishis'.

The responsibilities of the Sun are changing too, with Surya-Martanda taking over the roles previously held by the great Solar King Trisanku, of the constellation Crux in the sky.

Agni, meanwhile battles Asura king Vala. In aftermath, every part of the giant Vala's body breaking down into precious stones and minerals, the origins of diamonds, pearls, rubies, emeralds, lapis, cats-eye, topaz, corals and the like.

The star Sirius, known in Sanskrit as the sage Vishvamitra, not to be outdone for influence, and especially by Vasishta, creates a reduplication of almost all the stars in the sky. To his credit to legend bear all the stars of the Southern Hemisphere. Ensuring the stars and constellations all across the sky to this today, still look somewhat alike.

But barely are the sages and stages set to part when Brahma, the great lord creator on a chariot of flying horses churns the heavens to become the oceans of Earth. And none but us today see its implications.

This, that, and so much more of the stars ancient, we see today.

As well as the stars of the philosopher's stone, the fountainhead, and a bit about every prominent star from Indian astronomy of every constellation in the sky. India
Janit Gambhir is an author filmmaker based out of India. Most of his life has been spent in some pursuit of consciousness or the other, also being a Reiki Master, and teacher of various divination forms. Fire-dancing, tarot, healing and consciousness centering to name just a few. Creatively, Janit started working in film and television in the year 2000. 22 years later, the hermit takes to...
Learn more about Janit Gambhir