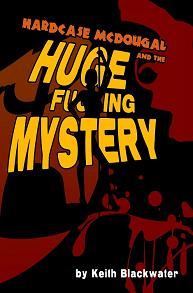 All he wanted was a chorrita. What he got instead was a huge f**king mystery.
When Communists threaten to blow up the moon, America's premiere private detective takes rash and direct action. Join the hard-rocking, hard-drugging, hard-wienered James "Hardcase" McDougal and his colorful cast of friends as they battle robots, red-headed kid detectives, machine-gun-toting transvestites, Communist plotters, and their own terrible personalities.
Is HARDCASE MCDOUGAL AND THE HUGE F**KING MYSTERY a bleak, hyperbolic portrait of modern America and Americanism? Is it a 200-page joke with a missing punchline? The metaphorical and metaphysical implications of McDougal's journey are up to the bravery and wisdom of the reader.
“HARDCASE MCDOUGAL AND THE HUGE F**KING MYSTERY is like if somebody put WHITE FANG and THE TERMINATOR in a meat grinder and made a juicy meatloaf, then wrapped it in a bacon of musky sensuality and impeccable literary style. You like ketchup on your meatloaf? Well we're all out of ketchup, but what we do have is a gritty, raw portrait of American violence, racial tension, and misogyny. Keith Blackwater is one surrealist who knows how to keep it real.”
--Nobody actually said this
Hardcase McDougal and the Huge F**king Mystery on Amazon
Keith Blackwater on Facebook