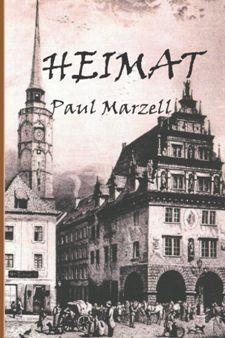 Heimat is a saga of the journey of four young men who left  Germany in 1929 for the United States to find a better future and leave Germany’s dismal post-World War One economy and humiliation of defeat behind.

Matthias, a baker, also went to avoid an intolerable family situation. Josef, a watchmaker, left on a whim to join Matthias. Edo, a tailor, left to escape government-sanctioned anti-Semitism and to prepare for his family’s emigration to follow. And, Feliks, an ethnic Polish, teenager because his family’s farm could not support him.

Each hoped to return as an American citizen and a shining example of American success. However, before they got to Bremerhaven and their ship, the TS Bremen, on its maiden voyage to America, their plans began to change when they saved an American diplomat‘s life from the tracks in Berlin’s Bahnhof. Their heroic act bonded them and the diplomat in a friendship that sustained them through broken promises, misconceptions of the American dream, the Great Depression, Prohibition, assimilating into the American culture, and World War Two.

Before the outbreak of the war, Matthias’s commitment to his plan wavered as letters from his mother, girlfriend, sisters, and others urged him to return to Germany as the Nazi regime improved Germany’s economy and raised its national pride. However, the war severed Matthias’s contact with his family for five years and sent him and his friends on separate paths. One to a shipyard to build ships to carry the means to destroy Germany and their Heimat. Into the US Army to fight in the Pacific after surviving the Japanese attack on Pearl Harbor. Conscription into Germany’s  Wehrmacht to invade France, Russia and fight in the Battle of the Bulge against American forces. And the Nuremberg trials to bring Nazi war criminals to justice.

I was inspired to write Heimat while doing a family tree project for my first grandchild. In addition to having access to numerous public documents, such as Census and church records, I also had the good fortune that my father kept photos, his birth certificate, immigration documents, passport, and various government forms that facilitated a timeline for the story. Most importantly, he saved correspondence from his mother, sisters, and other relatives during the years before and after World War Two and the early 1960s.

Most of the letters were handwritten in the Sütterlin Schrift, so I had to transcribe them into modern, readable German and then translate them into English. I must confess that the translations are not precise because my fluency in German is wide open for improvement. But I squeezed enough clarity from the letters to see the conflict of an immigrant’s allegiance to his country of origin, his commitment to his adopted country, and his mother’s need to see her son again.

United States
Paul Marzell was born and raised in Philadelphia and currently resides in western Pennsylvania with his wife, Janet and Golden Retriever, Nala. He is a United States Air Force veteran and served in West Germany in the early sixties. He earned BSBA and MBA degrees in operations management and financial analysis from Temple University and Golden Gate University. Heimat is his first novel.
Learn more about Paul F. Marzell