I am Johnny Black 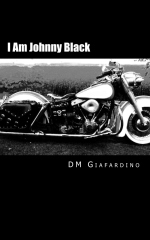 I AM JOHNNY BLACK is the first story in the Biker Fiction Series; Meet Johnny Black.

19 year old Johnny “Black” Nigro finds himself in the middle of one of the largest alliances in underworld history. What started as a young man’s adventure turns into chaos when fueled by the mix of two rival biker gangs, girls, a fugitive informant, dirty cops, and the quest for power collide head on in South Florida during America’s drug heyday in the 1980’s.

Johnny leaves home and the love of his best friend, Jen, to travel the country on a motorcycle. Thoughts of her and what could have been are only silenced by his wanderlust. Unknown to him, the motorcycle he is riding is stolen goods purchased from a degenerate gambler. The rightful owner, an independent biker named Odin, makes an unorthodox deal to be released from prison.

Rogue FBI Agent Daniel Murphy has Odin released into his custody as an informant. Murphy, with visions of a political career, will stop at nothing short from becoming the next Eliot Ness. Odin wants nothing more than to be free and his bike back. Murphy realizes that he has to make other plans for him.

Johnny takes refuge for the winter in Florida, where he befriends a high ranking biker by the name of Hitch. He is soon employed by Hitch to run pot for the club. Johnny is then made part of a deal which would unite two large outlaw motorcycle gangs into a major criminal force. Life soon becomes exciting in the fast lane. Hitch has an uncommon bond to RB, a head figure in the rival gang’s hierarchy. Hitch and RB were once army brothers. Now divided by circumstance, the two are aligning their gangs to lock up the distribution of marijuana in the United States.

Agent Murphy is waiting for the optimum moment to strike, while Hitch becomes a fiend for crystal meth. RB is led into disaster by Odin, and Johnny is getting what could be his final sermon.

I am Johnny Black - Amazon

United States
DM Giafardino (Donnie Pizza) is an American author of Biker Tales and Other Assorted Love Songs. Don was born in Port Chester, NY in 1963. He grew up in the adjacent town of Byram, Ct. This ethnically mixed, working class neighborhood provides the basis for some of his writings.His "careers" have included being a crane operator, cell-phone tower climber, columnist, mechanic, truck...
Learn more about DM Giafardino