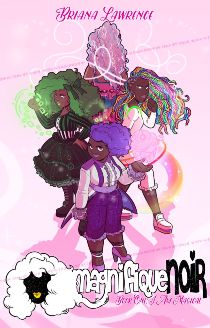 "The revolution will be magical."

There’s a city. It’s like most other cities. Buildings. People. Monsters who can destroy sidewalks by vomiting acid onto the ground, and an elite group of black, queer, magical girls who work to put those monsters in their place.

Bree Danvers would’ve compared it to a video game, maybe a cartoon or comic book, except black girls are rarely the heroines of the story. But there her heroine stood, plus size and wonderful, rocking a dazzling amount of purple and defeating monsters with galactic sparkles. Galactic Purple, that was her name, and soon, Bree was joining her on a magical adventure full of transformations and after school battles to defend a city like most other cities.

And soon, others would join them, and each one would be magical in their own way… give or take a few bumps on the acid covered ground.

Black, queer, magical girls. These three words don't normally go together, but it represents so many of us and that's who I wanted to write this book for. Them and more, because we're all magical. Don't ever forget that. United States
At the age of nine, like most kids, Briana Lawrence had a dream. She wanted to be the best “WRITTER” in the whole wide world. Her fourth grade class laughed and wondered how one hoped to become a “writer” if they couldn’t even spell the word. Back then her stories were created with crayons and construction paper. As she grew older they progressed into notebooks and colored ink pens of pink,...
Learn more about Briana Lawrence