I want to speak Chinese...NOW! 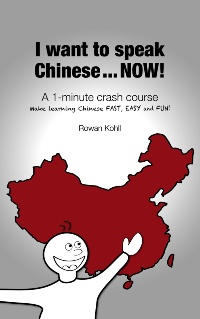 Chinese is fast becoming one of the most popular languages to learn in the world. Unfortunately, as languages go, it is a hard one to learn. Chinese comes from a completely different family of languages than English, and makes learning French, or German, or Spanish look easy by comparison.

I have seen many people experience this problem over the years I have lived in China. People who earnestly want to learn Chinese but, confronted by the sheer difficulty of the language, often simply give up – sometimes after spending months or years saying they want to learn it.

Fortunately, there is a solution: the 1-Minute Chinese books. These are a series of books designed to teach you everything you need to know about reading, speaking and writing Chinese, as swiftly as possible. They are so named because, with the special mnemonic “memory tricks” in them, you can learn to read and speak Chinese much more quickly than usual.

So just download this book…and you will do so!

China
Where did you grow up, and how did this influence your writing? I grew up in Wales, UK, and always loved reading books. Some of my favourite reads as a child were Asterix, Tintin, Star Trek and Star Wars novels and Roald Dahl. When anyone asked me what I wanted to be when I grew up, I would always say that I wanted to be an author. as I grew up and learned about publishing, I put this dream...
Learn more about Rowan Kohll