An Invocation for their Revocation
Book by BS Murthy 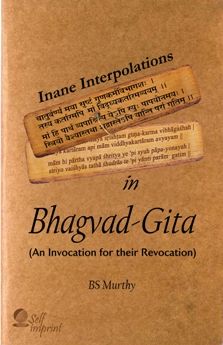 The Manusmriti, the social doctrine of yore, and the Bhagvad-Gita, the spiritual tome in vogue that lay down the discriminatory dharma (duties) of the four social classes (castes) have been the bugbears of the Hindu backward classes. However, to their chagrin, of late, as the latter is being mindlessly promoted even though the former was constitutionally debunked, they began advocating that it too should be dumped in a dustbin.

Ironically, the improbability of their progenitor Krishna, the architect of the Gita, relegating his own ilk to the social margins failed to dawn upon these that Gita supposedly slights, even to this day! Thus, their intellectuals, instead of seeking to reclaim their priceless heritage, albeit after ridding its interpolative garbage, tend to rubbish it a la throwing the baby with the bathwater, and needless to say they must ponder.

Also, it is high time that the Gita-class stop laying store by the self-aggrandizing verses in this Vyāsa’s classic, evidently inserted by their progenitors that came to bedevil the Hindu spiritual integrity and social harmony. Likewise, the grumblers of the dalit desertions must see the need for setting the Hindu house in order to prevent the fractious poaching by the Church, if not to facilitate the ‘hoped for’ return of the prodigals. So also those who take pride that Hinduism is the only religion that reckons all faith as true, should be concerned about the ‘in vogue’ Gita that belittles some of their caste fellows. Besides, this work beckons the feminists to reckon the second of the two interpolations from it cited in the cover image that degrades them in unspeakable terms.

This ‘overdue’ work, may lead the ‘denied’ Hindu castes as well as the favored folks for an objective approach to the in vogue Bhagvad-Gita which could dispel the misgivings of the former and the delusions of the latter, thereby bridging the Hindu emotional gulf with its abridged book that restores its original form. Whether or not one concurs with its propositions, this original work could be of interest to the students of logic and reasoning as well.

When it comes to my tryst with Bhagvad-Gita, I may say that one thing led to the other, but with a difference – I can share the details with the public in this invocation for the revocation of its inane interpolations from it.

When I was around twelve, my paternal grandfather encouraged me to read the Gita even as he discouraged my mother from venturing into it, voicing the then prevailing view that if women were to imbibe its philosophy, then that could undermine their emotive self in the family fold. Given the lower levels of child awareness in those village days, comparatively speaking that is, as I could neither share Arjuna’s concerns nor grasp Krishna’s response, my first brush with the Gita ended before the end of its second chapter.

However, over two score years later, as it happened, it was a human tragedy that occasioned my fortuitous reengagement with the Gita, eventually that was, as, in the wake of the 2002 Godhra-Gujarat riots, the Op-eds in the print and the debates in the idiot box exhibited the vacuity of the Indian intelligentsia. As that laid the seeds of my Puppets of Faith: Theory of Communal Strife that sought to explore the role, if any, the religions play in fomenting communal discord, and if so, in which way, which in turn compelled me to seek out the Gita that is after perusing the Semitic scriptures. When I could see that apart from sharing the highway of devotion to the God with the Torah, the Bible, and the Quran for salvation, the Gita showed a subway of devotion to Duty leading up to moksha, I found it fascinating as by disposition I am not faith-inclined for it is not a handmaiden of reason.

It’s thus, after the completion of that critical appraisal of the Islamic faith, Indian polity ‘n more, for which I transcreated some selected Sanskrit slokas of the Gita into English verses that I set out to go the whole hog for its wholesome fare. Though Glaring Shadow was in wait to come into the light for by then I had done the novelling of Benign Flame, Jewel-less Crown and Crossing the Mirage, yet this epic pulled me onto its translative course. However, when I checked out of its third post, its route diversion from the set course that I came across perplexed me no end, but nevertheless as I persevered, to my utter dismay, its sectarian pattern became increasingly apparent. Then as it dawned on me that the epic is not to be taken at its face value and it is worth subjecting it to some form of scrutiny, so I looked around for precedents for guidance, but found none save Sir Edwin Arnold’s dismissal of slokas 23 thru 28 of its eighth chapter for they imply that “if one dies when the moon is on the ascent he would be heaven bound and, to hell if it’s other way round”, as the ranting of some vedānti.

It’s thus, I ploughed my lonely furrow in the Gita’s contaminated field and in the end could manage, needless to say with great effort, to ferret out 110 inane embedments, some of which have long been the impediments to the spiritual and social amity of the Hindu polity. So, I could visualize a social purpose in going public with my discoveries through Bhagvad-Gita: Treatise of Self-help, and thanks to Michael S. Hart, it first appeared in the public domain as free eBook at Project Gutenberg Self-Publishing Press only to make its way into umpteen literary websites thereafter. It’s no less heartening that Mike Stickles has accorded the pride of place to my work among the Gita’s translations at the Great Books and Classics site, and what is more, slowly but steadily it has been gaining ground in the web world, that too to some acclaim.

Though not resting on its laurels for I was engaged in creating seven more books in varied genres, including the translation of Sundara Kānda, of Ramayana, the foremost poetic composition in the world of letters, as Hanuman’s Odyssey, in English verses, and lo, its author, Sage Valmiki, was a Shudra that the ‘in vogue’ Gita belittles! Whatever, I left the Gita at that, but not before supplementing its eBook with a demonstrative audio rendition, also in the public domain. However, owing to its philosophical imprint that got etched in my mind, all along, I have been able to fend for myself through the lows of life without seeking His succor and support.

Now, eighteen years later, fortuitously yet again, my childhood artist friend, E. Rohini Kumar, who saw my Bhagvad-Gita: Treatise of Self-help, sans 110 inane interpolations, that carried only the rest of its ‘original’ verses, as an unfinished work, goaded me to place those inanities in the public domain for a reasoned review with a rational outlook. However, it is his hunch that the ‘overdue’ work, might lead the denied castes as well as the favoured folks for an objective approach to Gita ‘as it is’ which could dispel the misgivings of the former and the delusions of the latter that clinched the issue. Thus, serving the sore social need of bridging the Hindu emotional gulf with an abridged Gita that restores its original form owes to him for having conceptualized this Inane Interpolations in Bhagvad-Gita - An Invocation for their Revocation for which he conceived the cover as well, like he did for my earlier books, and now that women too have a free rein on this masterpiece, it is hoped that the propositions herein could be well-received, if not readily, maybe in times to come. India
BS Murthy is an Indian novelist, playwright, short story, non-fiction 'n articles writer, translator, a 'little' thinker and a budding philosopher in ‘Addendum to Evolution: Origins of the World by Eastern Speculative Philosophy’ that was originally published in The Examined Life On-Line Philosophy Journal, Vol. 05 Issue 18, Summer 2004. Born in 1948 and schooled in letter-writing, he...
Learn more about BS Murthy

DELIVERED BY A QUEEN