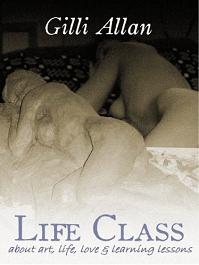 LIFE CLASS - about art, life, love and learning lessons.
Four very different individuals a 'VD' lady, a housewife, a rent boy and a sculptor all have their own reasons for attending the Life Class. They all have different ambitions and expectations from life. By the end of the story, each of them has experienced a change of heart.
The ‘VD lady’ is a risk-averse realist, who finds herself chasing a dream. Dory is a scientist by training. She ran a private STD clinic with her partner in London.  Following the failure of the personal dimension of this relationship, she returns to her home town. Men don’t figure in her view of the future.  She wants to buy a house and start her own business. But what?  In the past she’s often done what others expected of her, This time, and against her better judgement, it’s her sister, Fran, who’s pushed her into joining the Life Class.
The sculptor is a loner who needs to let other people into his life.  Stefan struggles to establish himself as a sculptor.  Haunted by the past, he sees his failure as natural justice for youthful cruelty. He takes a part-time teaching job but it’s a decision he quickly comes to repent when faced with a class of people entrenched in their own way of doing things. Still determined to make it as a sculptor entirely on his own, he plans to sell the house he’s inherited, using the proceeds to invest in his career. But plans can go awry, and snap judgements can change. Ultimately he realises that accepting help is not failure.
The housewife (Dory’s older sister) is a romantic, who needs to take a reality check.
Fran tries to organise everyone’s life for them, while her own life is in danger of falling apart. She went to art school, but now the weekly Life Class is as much a social event as an opportunity for recreational drawing; to date there’s not been much teaching going on. Her husband is taking early retirement and, after disastrous A level results, her daughter, Mel, is going travelling. At a dangerous tipping point in her life, an on-line flirtation threatens to get out of hand.
The rent boy is an angry child who’s been living dangerously.  Born into a dysfunctional family Dom was taken into care as a child.  He has recently dropped out of the care system and, though he enjoyed art at school, he has also dropped out of education.  When he meets Stefan he is making a living by selling sex.  The older man encourages Dom to join the Life Class as a route to Art School.  Although he wants to do it, his personal life is chaotic and full of risky temptations. And he still has a lot of growing up to do.
Buy on Amazon
LIFE CLASS | Amazon (Paperback)
LIFE CLASS | Amazon UK
ISBN:
978-1783752546

United Kingdom
Growing up in the UK - in Orpington, Kent - my hobbies were drawing and writing ‘books’.  School and I didn’t get on and, as soon as I was able to, I left and went on to Art College.  I originally worked as an illustrator, in advertising.  I only began writing again, with the serious intention of being published, when I was married and at home with my young son. I write...
Learn more about Gilli Allan