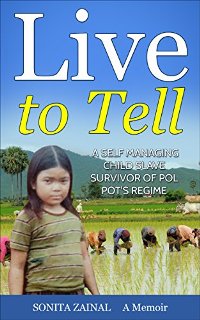 Live to Tell is a gripping testimony from Sonita Zainal of bone true facts and emotional recollections – showing the world how even when only a young girl, from age five; for four years, with amazing grit and determination. She endured and survived the horrendous Pol Pot’s Khmer Rouge regime in Cambodia – eventually escaping through jungle infested landmines to United Nations refugee camps in Thailand.

After losing her beloved father when only six years old and already a victim of opportunistic abuse, Sonita became a child slave in a zone of barbaric atrocities – constantly putting herself in danger; with determination and initiative, to avoid starvation. To enable her survival, she developed a stay alive against all odds attitude, relying only on her own personal initiative. So, Sonita quickly became an adult minded, responsible kid – without a natural childhood; she only remembers two playthings, one she would rather have done without.

The writer has presented shocking and unbelievable, yet unfortunately, true stories of victims and survivors of that barbaric and misguided regime; showing herself to be deeply empathetic to those – particularly women – who were themselves young at that time, and now live everyday with haunting memories of their traumatic experiences – often, the loss of innocent loved ones. She has returned a number of times; of which she writes, to connect and research with survivors and family members in her birth and neighbouring countries.

Sonita expresses her sadness to see, decades later, so many of those survivors still living in poverty – often on their own; having had husbands murdered by that regime, or now separated from enforced marriage to Khmer Rouge men. They just struggle on with determination to survive, making the best of their lives for themselves and any children they may have, who often are helping their mothers or aunties to the best of their abilities.

The writer shows how deeply touched she is when seeing, or meeting, desperate children scrounging for food items; or even more so, older ones, striving committedly with focused determination and initiative, to improve their own or family living conditions and life prospects. Which, as she states, reminds her so poignantly of her own survival endeavours, when in similar circumstances, at the same age span – so powerfully written about.

Sonita writes to clearly show how she thought and reacted, in those continually dangerous and unstable childhood years – being always mindful to not overstate with knowledge that she did not have at the time; if not having detailed memory of an event, always mentions so, when complementing her story with later adult knowledge and insight. The book is not just a sequence of stories of events, but is impregnated with profound reflected understanding of behaviours and inspirational teaching, giving it worthy credit of being a meritorious literature.

It is cleverly written, in the manner of the author’s child mind at the time of events portrayed – she is even able to show some fun and humour; as a child may naturally seek to express – even in appalling circumstances. Sonita impresses with her candid honesty, giving stark exposure of dreadful life situations that most of us from secure backgrounds, would find hard to imagine. She inspires as an admirable example of the fortitude of destitute children, showing determination to never give up in any adverse situation.

Readers are sure to be captivated and enthralled by this book; finding it hard to put down until read. Those who have had a difficult childhood, will find an understanding, compassionate and inspiring friend.

Live to Tell - Available from Amazon

This book draws on my experiences as a child, but not to highlight them as being just a string of stories with vivid description. Some, I do not have detailed recall; and would often prefer not to, but have done my best when needed for you, dear reader, to know me for whom I was, during my challenging time under the Pol Pot’s Khmer Rouge regime in Cambodia; then my endeavours to assist my family and improve myself, while living for a few years in Thailand refugee camps. It has always been my intention since my early twenties to write this book. Those experiences are written to show how my childhood personality developed from them. Persons with whom I was connected are written about, only to the extent of their impact on me – when later in life; reflecting to understand, how their attitudes have helped me to establish my own value system – which I now use to develop my life towards self-fulfilment. I also feel a duty to tell my personal story, as an example of one of those thousands of young Cambodians, who had their childhood innocence stripped from them during Pol Pot’s four years regime. Then if lucky, escaping to find accepting refuge in Thailand, with grateful help from the United Nations for basic welfare and safety – then to eventually be re-settled in another country.

I have also selected harrowing stories that I have come to know of, from other survivors of that evil regime; for which I am grateful to them for telling me, and giving permission to expose some of their traumatic experiences to the world. I would not wish to tell all the horrendous stories told to me by those Khmer Rouge regime survivors. I am sure what I have written in this book is enough for any reader, and myself, as a receiver and observer of those soulless, inhumane and cruel treatments – to feel revolted. It has not been easy for me to research those stories, and to tell my own; but I feel I would be denying my duty to do so, if this book was not written.

Australia
I was born in Cambodia in 1970. When I was five years old, the country was taken over by Pol Pot's regime. That dictator and his Khmer Rouge group threw the whole country into chaos and extreme suffering for four years, killing almost two million innocent victims. My father was one of them, brutally killed when I was only six. My mum, six siblings and myself are lucky to be alive, and are...
Learn more about Sonita Zainal

The Road to the Registry

Into Africa a Personal Journey