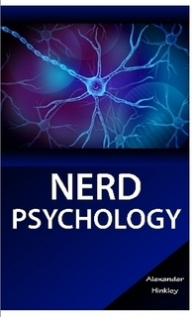 Nerd Psychology details what makes someone a nerd. It goes into the differences between a nerd and a geek and explains the rationale of the nerd's behavior. Nerd Psychology is relevant to everybody that uses the internet as most people have encountered nerd-like personalities. This book also gives you some advice on how to effectively deal with nerds when they attempt to ego boost and troll you as well as arm you with a list of symptoms that can help you quickly and accurately identify nerds before their behavior even reveals them. Nerd Psychology was written after interviewing literally thousands of nerds over the course of three years and identifying common patterns in their behavior.

Get Your Copy of 'Nerd Psychology'

Alex is 29 years old and lives in Western New York. He has a Bachelor's Degree in Criminal Justice from Niagara University and a Certification in Security Management and Homeland Security from The University of Massachusetts Lowell. He is also professionally certified in Statement Analysis. Despite his education in the field of Criminal Justice, Alex instead chose to pursue a writing career and became a video game and sports journalist out of college. He has worked as a video games journalist since 2009. As of January 2016, his online content has been viewed over 30.6 million times.... more