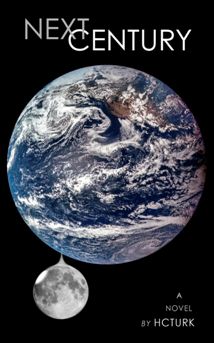 Next Century tells the same story set in three different eras and locales: 1799 (London), 1999 (Midwest America), and 2099 (the Moon). In each story, a young woman (Claire) seeks vengeance against her father, who has been abusing her mother for years. In each era, Claire is raped by thugs, becomes pregnant, and has to proceed in society with her child but no legitimate father.

Book 1: London, 1799. Playing with a lad named Walter, Claire Easton learns that boys are sent to school for an education, though girls are taught to sew at home. She learns of social punition by seeing her mother receive a caning from her husband for not having born an heir.

As a young adult, Claire tries to gain employment, but is reviled for behaving like a man. Seeing her mother beaten once too often, Claire goes to Walter. She convinces him to lead her to a thugs’ roost, where Claire will purchase a thrashing for her father. Instead, thugs force Walter to have sex with Claire. The men are enjailed, and Claire becomes pregnant.

Claire is fired due to her wanton behavior. But her employer’s son, Richmond, proposes marriage. Claire accepts. After the child is born, Claire petitions for Walter’s release from prison. She tries to achieve an emotional bond with her husband, but fails. Two years later, hearing that Walter will be freed, Richmond kills himself.

Though not in love, Claire and Walter are together in life. Claire now understands that she can best succeed not by attacking society, but by progressing with her living. In 1825, Claire, Walter, and their daughter leave for America.

Books 2 and 3 tell the same story modified to account for the different settings and societies: Mid-West America, 1999; and the Moon, 2099.

Next Century - from Amazon

H. C. Turk is a writer, sound artist, and visual artist. His novels have been published by Villard and Tor. His short fiction has been published in theNewerYork, Gadfly, The New Bourgeois, LitUP, Nonlocal Science Fiction, Dirty Chai, Smashed Cat, Linguistic Erosion, Weirdyear, Monkey Bicycle, Streetcake, The New Post-Literate, Farther Stars, and The Chicago Review. His sound pieces, movies, and visual art have appeared in numerous magazines, web-sites, podcasts, and film festivals. He used to paint houses (not as an art form.)