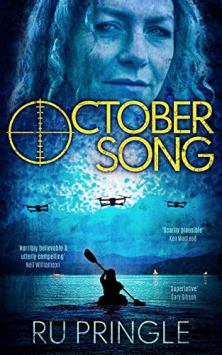 With elements of police procedural, spy novel and political action thriller, October Song is both a darkly gripping roller-coaster ride and a blistering reflection on a world on the edge of collapse.

COIRA KEIR is a long-serving police officer. Abrasive, but respected by her peers, she has an enviable track record. When a bomb explodes outside the North British Council Building at Holyrood, Edinburgh, dozens of bystanders are left dead. Among the critically wounded is the Prime Minister of the United Kingdom, whose safety was Keir's responsibility.

Army veteran Sebastian Blakeslee is an operational advisor for MI5, the domestic security agency of the United Kingdom. Lorna Ainsworth is the agency’s territorial chief. Together, they find themselves leading a joint police and MI5 taskforce. Its mission: track Keir down before more bombs go off.

What follows is a cat-and-mouse chase towards the front of an intensifying war - along a wild coast where thousands of desperate boat-borne refugees are hiding. Meanwhile, as the taskforce will discover to its cost, someone seems to be going to extraordinary lengths to stop Keir being found.

It started life as an idea for a screenplay, written for an actor I know (who's now my girlfriend). The original idea was to develop a short thriller that could be shot fairly close to where we both live, making use of the wonderful Highland west coast scenery. However, I'd only written a few pages when I thought 'hang on, this is starting to feel like a book.' Much to her disgust, I then got obsessed with developing the embryonic idea into a novel - I still haven't written the screenplay, though I've promised to make it up to her by writing something else. Some of my other books have been hard work, but for some reason this one developed a momentum all of its own, at least until editing, which I always find hard. I also got some good advice particularly from my agent about aspects of the story that weren't quite in balance - one of my favourite characters in the book was a last minute addition because of this.

United Kingdom
'Ru Pringle is one of the most interesting and exciting new writers to emerge north of the border since Iain Banks' - Gary Gibson, award-nominated author of Angel Stations, Against Gravity and Stealing Light. Ru Pringle began his writing career at the age of 18, paying university bills by writing features for outdoor and climbing magazines. After a stint as an environmental scientist, he...
Learn more about Ru Pringle