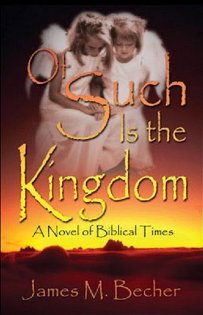 During the time of Jesus and of the historical Roman Empire, what would a cynical, non-conformist dry-goods salesman, a disgruntled blacksmith, and a musing mendicant all have in common?   Down deep, they all seek something better; and eventually, they all find the childlike faith and humility required to enter God's kingdom and find true fulfillment.  The nonconformist, Manaheem, Herod’s foster brother, helps Herod foment an insurrection against Pontius Pilate, using the blacksmith, Barabbas, as insurrection leader, to the dismay of Barabbas' Godly but fearful wife. The mendicant, a young man named Timotheus, joins with an older mendicant completely unsympathetic to his musings. Meanwhile, Pontius Pilate’s wife pushes him to take over Herod’s kingdom. When the insurrection fails,no-conformist, Manaheem, tries to blackmail Herod, and Barabbas turns to robbery, enlisting the aid of our two mendicants. Manaheem almost loses his one true love, his former wife Claressa, also a non-conformist, with whom Manaheem is trying to re-unite. The robbery goes bad, and Barabbas and the mendicants are caught, tried for murder and sentenced to death by crucifixion. Barabbas is also charged with the insurrection against Pontius Pilate.   Thus, all 3 of these divergent characters are surprisingly effected in one way or another by the life and death this man from Nazareth.  Part III starts with the resurrection and runs theough Acts 12, showing the start of the early church and how Manaheem and Barabbas function within it.

This novel started as a short story, for which I won a prize in Jr. College. After college and Seminary, I added some characters and expanded it into a novel. Then about 10 years ago, I revised it and expanded it further into a 3-part novel. It was since split into 2 volumes, with parts I&II forming the first volume and Part II the sequel. The entire 3-part 370-page edition is officially out of print, though you can find print copies on Amazon, and you can get the entire 3-part 90,000+ word ebook in all e-venues, including Kindle. It was originally priced at $4.99 (Not bad for 90,000+words?) but in an effort to gain more sales, I just reduced it to $3.99. United States
I was born in Lancaster, Pennsylvania, on in 1943, to a Christian family and accepted Christ at an early age. I was an avid reader in my youth, especially interested in stories about other time periods and also science fiction. In Jr. High school, I became interested in writing and drama. I wrote several poems, articles and a few short stories, plays and novelettes. While attending St....
Learn more about James M. Becher