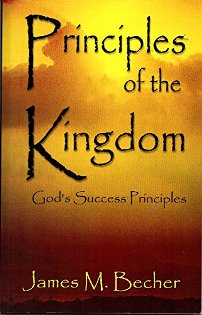 I contend that God has several principles, which if followed can lead to success either in business or in life itself, and that although many of these same principles may be found among the motivational speakers and thinkers of today, that they were originally derived from Holy Scripture, whether or not these modern spokespersons are aware of it.   Furthermore, Jesus' teachings on the growth and inclusiveness of the kingdom show that not everyone who preaches or practices Kingdom principles will be found to be in the Kingdom at the end.

The 17 chapters of this book contain 17 articles relating to 17 of these principles, such as forgetting the past, conquering your fears, focusing on your objective, giving and receiving, resting and others,  with quotable quotes and examples from my novel, "Of Such Is The Kingdom, A Novel of Biblical Times."

I compiled this book from articles I had written for my "Inspirational Success Tips" ezine (now unpublished). When the ezine closed due to a shutdown of the server, I decided to put the articles into book form in order to preserve and pass on these principles for present and future generations. NOW through September 21, the ebook is just $0.99 in all e-venues including Kindle.

I was born in Lancaster, Pennsylvania, on in 1943, to a Christian family and accepted Christ at an early age. I was an avid reader in my youth, especially interested in stories about other time periods and also science fiction. In Jr. High school, I became interested in writing and drama. I wrote several poems, articles and a few short stories, plays and novelettes.
While attending St.Petersburg Jr. College, I won second prize in a short story contest with the Biblical short story, "Beggarman-Thief."
I graduated from Clearwater Christian College in 1970, with a B.A.... more

Other books by James M. Becher