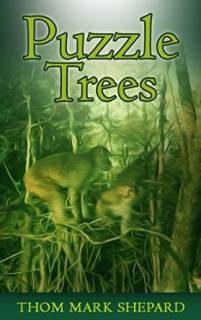 Countless vampire and zombie novels have been published for young adults, but Puzzle Trees uniquely explores the impact of horror entertainment upon one vulnerable high school freshman.

The Story
High school freshman Joe Sheffield has only recently begun to control his obsession with all things grim and gruesome. But when two of his best friends move away, and his last best friend gravitates toward a new set of friends, Joe feels his dark fantasies and phobias returning with a vengeance, even as he is drawn to Gina, a mysterious bird-like classmate with her own dark secret.
While searching for his principal's kitten, Joe discovers that several cats have disappeared within a single day from his principal's neighborhood. Unable to accept a more rational explanation, he comes to believe that predatory green primates have moved among the "puzzle trees," those decaying woods that lie between his principal's house and his own. When Theo, his skeptical but equally troubled half-brother, pays Joe a surprise visit, they go hunting for these possibly real, possibly imaginary creatures. Their astonishing discovery opens the door to a deeper mystery, one with potentially tragic consequences, which Joe must face alone.

I am a librarian who has worked in both public television and research and development organizations. My short story, The Tannery won the Ellis Literary Award at Indiana University, and my short story, Stick and Strings, published in Mid-American Review, was nominated for a Pushcart Prize. An earlier draft of Puzzle Trees, titled, The Green Apettes, was one of three finalists in a YA contest sponsored by Leapfrog Press. The judges were Alexandria LaFaye (The Keening) and B.B. Wurge (Last Notebook of Leonardo), and I have taken to heart their invaluable suggestions with this new version of... more