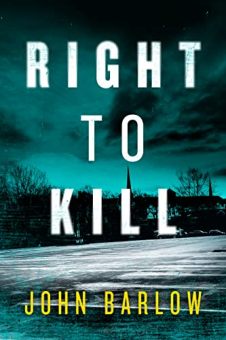 Published in the UK by HarperCollins, this is the debut thriller in a gripping new British detective crime fiction series. For fans of Harlen Coben and Ian Rankin.

They’re guilty, but do they deserve to die?

On a Thursday night in February, Detective Sergeant Joe Romano is following up on the disappearance of drug dealer Craig Shaw. It’s the start of a case that could make or break his career. Because Shaw is about to go from missing to murdered.

While some don’t think Shaw’s killer should be brought to justice, Romano believes every life counts. But he’s running out of time. The killer is ready to strike again. And Romano will be forced to question whether anyone has the right to kill.

Reviews
‘A striking debut. John Barlow’s Right to Kill offers an intriguing plot and a gritty sense of place. I hope we’ll be seeing a lot more of DS Joe Romano in the future’ Peter Robinson, Sunday Times bestselling author of the DCI Banks series

‘An outstandingly good first instalment: the next one can’t come soon enough.’ The Quietus

‘A commercial thriller that highlights hot-button regional and national issues . . . sure to generate conversation’ Yorkshire Post

‘Noir at its most authentic. A gritty, uncompromising thriller, but written from the heart.’ Paul Finch, Sunday Times bestselling author of author of the DS Mark Heckenburg series

I wrote RIGHT TO KILL as a (murderous) love letter to Yorkshire, England. There’s something oddly welcoming about Yorkshire, the sense of walking into a pub in Leeds or Shipley or Wakefield… I love the people, the industrial/rural patchwork of the landscape, the sense of old industry having vanished, but the industriousness somehow still there. You can easily forget how distinctive the place and people are until you go back. I’ve also spent quite a bit of time in the South, and I still feel uncomfortable. Yorkshire’s different. You come up on the grain from Heathrow, step into Leeds station at midnight, and it feels like home. It’s not England. A different country, almost.

The settings in the novel are all real: the local library where I spent hours and hours as a kid; my old comprehensive school; the locations for both murders, where I used to walk the dog (I’ve had them waiting for a kill for years); the curry house in Birstall where I still eat every time I’m back; the pubs where I learnt how to get served under-age; the pie shop in Cleckheaton that inspired one of my earliest stories (a romance about pork pies)… I didn’t have to invent anything. It’s a distillation of everything I know and love about the area where I grew up. Even the name JOE ROMANO is real. He’s a friend of mine, a carpenter from Workshop.

The story: I saw a young man selling drugs in Cleckheaton (where I went to a school). Drugs have now expanded from there into pretty much all the old mill towns in the area, and are a permanent feature of life. I wondered what would happen if I killed him, there and then. What would be the public reaction? Would anybody care? The only weapon I had on me was a pencil, so I decided to write about it rather than actually do it.

The atmosphere surround the events in the book tries to reflect some of the current negative aspects of Yorkshire. The undercurrent of casual racism, which seems to have got gradually more overt during and after Brexit, despite the whole region having been avowedly multi-cultural for decades. There’s something different going on, something that wasn’t so palpable when I was younger. People are looking for something. A lot of people thought they’d found it when they voted for Brexit. But it’s still there. It’s not a lost cause, though. At least, JOE ROMANO doesn’t think so. United Kingdom
John was born in West Yorkshire, and worked as a cabaret musician before studying English Literature at Cambridge University, followed by a PhD in Language Acquisition at Hull University (UK). He worked as a university lecturer before moving Spain, where he now lives, working as a writer, translator and journalist. His first published work, the novella ‘Eating Mammals’, won the Paris...
Learn more about John Barlow