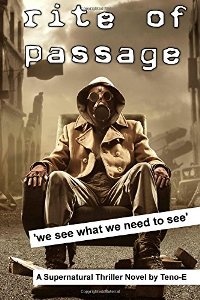 You wouldn't know about it and probably never will. Our human mind is not capable to handle what is hidden from us, and to tell you would probably give you a ride to the asylum, to  keeping the world safe from what you know. Sometimes you will read things in books and horror stories, things that go bump in the night and this will give you a chill down your spine as you walk alone at night. If he gets you, you will be reported missing, missing forever. If the company does not get to you in time, you and he both will and you will be stuck between hereafter and heaven.

But don't worry we are being watched every second of the day by 'The Company' who has the  two headed wolf as their insignia. According to urban legends the Company is located in the Vatican City; there they keep their technology and secrets safe between the walls  and floors, hidden in bunkers with hundreds of secret rooms and catacombs tunnels.

One person said that they have a direct line to the heavens there, but he is dead.

He drowned whilst on holiday.

In 1957, the first satellite was launched into space but this was not the truth - the first one was made operational in 1949, with insignia of the two headed wolf on its side. It made a 'bleeping' sound every few seconds showing it was alert and watchfully looking for him, the one they say the devil sent back by the devil himself. He is looking for revenge for those who made the mistake. They took his family; he is taking their families, one by one and has been for the past seventy years. Time does not heal everything.
But there is one man that can end it all, his name was 'David Thomas'  and he died more than a decade ago in catastrophic nuclear accident that occurred in 1986 at Chernobyl Nuclear Plant.