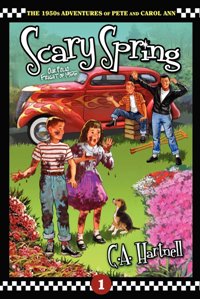 (The 1950s Adventures of Pete and Carol Ann)
"Fire it up" for friendship, fun, adventure, mystery, and courage that fill the pages of Scary Spring: Our Polio Fright of 1955. Like the Indian-head hood ornament on Aunt Jean's Pontiac Chieftain car that leads the way down dark and scary streets, Pete leads his friend, Carol Ann, on fun and frightening adventures. The two eleven-year-olds play fast-paced games of Hide and Seek, Hot Potato, and Jump Rope. They confront their polio vaccine fears then hunt for tasty treats like homemade cookies or Popsicles from the ice cream man. When they befriend a runaway white, tan, and black beagle puppy then spy on its owner, "mean, old Mr. Chester," things get really exciting! Mr. Chester's crooked body leans like a broken branch. Is he a monster? Did polio cripple his legs and heart? Will the puppy ever be safe with him? Pete, Carol Ann, and Hey Pup hide from Mr. Chester and listen to the teens next door as they "hop up" their hot rods while rock 'n' roll tunes swirl through their El Monte, California neighborhood. Words like "cool," "boss," "Dan's Diner," "Route 66," and "let's split this scene" flow freely. But when Ernie punches it in his '32 Ford Highboy and races toward a block wall, can his car named Wild Panther and its passengers survive? As the ravaging affects of the poliovirus present themselves, will these two All-American kids be able to overcome this deadly disease? "Like wow," Pete and Carol Ann learn that courage as well as friendship, family, and faith are important allies in their world. Ages eight and up will be thrilled and encouraged by this fast-paced, historical-fiction chapter book.