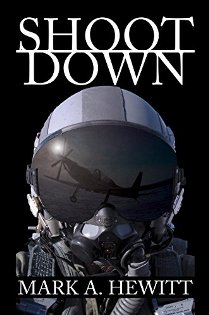 Shortly after takeoff, a jumbo jet explodes over the waters of Long Island. Witnesses claim the aircraft was shot down by a surface-to-air missile; the government insists a mechanical malfunction brought down the airplane. An old CIA file is uncovered which details the President was warned-to preclude commercial airliners from being shot out of the sky either pay a ransom or suffer the consequences.

Just as the Agency identifies the shadowy man responsible for the shoot down of the airliner, the Libyan dictator Gaddafi is overthrown, sparking a race between the CIA and terrorist networks to win the ultimate terrorist prize-hundreds of man-portable, shoulder-launched, anti-aircraft missiles.

Duncan Hunter and his top secret airplane once again team up with an expert crew to find the anti-aircraft missiles ahead of the al-Qaeda and Muslim Brotherhood, and kill the man who shoots down airliners for profit.

Book was approved by the CIA Publication Review Board.

Shoot Down - from Amazon

Mark’s interest in spies and spy planes began when Francis Gary Powers, the U-2 pilot shot down over the Soviet Union, splashed onto the headlines. He passed on The Hardy Boys and read everything from Alistair MacLean, Ian Fleming, and John le Carré. It was a natural fit to see his protagonist as a pilot and a spy, flying a little-known spy plane to get deep behind enemy lines and hunt down the world’s worst terrorists.

His Duncan Hunter books reflect his experiences as well as his love for all things aviation. He flew the fighter jet of his childhood dreams, the venerable F-4... more