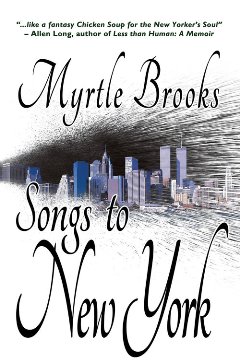 Songs to New York is Author Myrtle Brook's love affair with the Big Apple served in ten slices: literary fantasy short stories on extraordinary events occurring to everyday people in the five boroughs. "The Sanctity of the Mails:" observed in Heaven via the Brooklyn Post Office. A Staten Island-raised engineer who escapes city living, only to find the city inside himself. A Manhattan West Side cat who rides a bicycle, whose presence effects a transformation within his community. The unique bond between a little boy and an earthworm in the Bronx. A mysterious floor in a Queens apartment building reachable through attainment alone.

The city comes to play in the lives of her people as do the people in the life of the city. In Songs to New York no line is drawn between the two. Absent of cynicism, the stories show mankind at its best in the face of such adversities as poverty, drug addiction, psychotrauma, loss of loved ones and of perspective. The answers are positive and uplifting.

Likewise, the city, too, is an entity who speaks for herself.

The characters from varying ethnic backgrounds and walks of life reflect the essence of New York and what she stands for: that you don’t have to be of any social status, position, race or nationality to experience a miracle in the city of miracles.

"A fantasy 'Chicken Soup for the New Yorker's Soul.'" -Allen Long, Author of Less than Human: A Memoir.

“Stories to warm the heart and stroke the imagination, lyrically told, reminding you why you love being a New Yorker or leaving you wishing you were.” -Mary Ellen Bramwell, Author of The Apple of My Eye, When I was Seven.

"The Upper West Side had a spirit all her own, a benevolent, mysterious woman who spoke little, but who smiled in welcome greeting each time he visited her; whose distinct perfume lingered long after his departure.
"But, as one-by-one the years advanced, and with them the unrelenting increase of crime and urban neglect, the perfume faded from Timothy's conscious memory…
"… Then, in the middle of the third year, the dreams began… As they recurred in the early morning hours, their impression lingered more and more, like perfume scarcely acknowledged until compounded by the wearer's frequency." - Chapter 4, The Bar.

After my first two (formative) years in New York City, when my family moved further and further upstate, my subconscious mind performed what I had too easily forgotten while awake. The dreams I had about the city recurred to the point of my weeping. Beset with poverty and homelessness, most times unable to afford a two-way train ticket to Grand Central Station, I wondered whether I would ever see the Big Apple again.
Years later, I returned with nothing save a trash bag containing clothing and personal items. I considered myself of great wealth: I was in New York.
My Mom joined me soon after, and we took a room in a residence hotel on the Upper West Side. After two more years of extreme economic hardship, I became a Post Office clerk in Brooklyn. During my overnight lunches and breaks, I began writing Songs to New York; and upon its completion waited until I had gained enough maturity as a writer to edit it.
However, it was at the Manhattan residence hotel room where I got the idea for my first story, The Cyclist, about a cat who rides a bicycle. Next door to the hotel was a brownstone with a large window facing ours. Who lived behind that window? I wondered.

United States
As written beneath her yearbook photo, Class of 1970, the expressed lifetime goal of Myrtle Brooks, author of Songs to New York, The Geyser Girl of Yellowstone Park and the upcoming novel, Stories of the Mother Bear, is “to realize the love present in everything.” Maturity has taught her that this is a vision to share. Watching The Wizard of Oz on television as a child, Myrtle always called...
Learn more about Myrtle Brooks