The After Death Afterlife of Ronald Foster 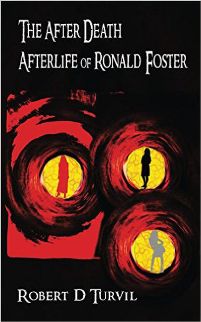 How would you feel if all your memories suddenly vanished? Ronald Foster panics, big time. Convinced that someone else is to blame, he sets out to track them down, determined to make them pay for hurling his life into torment.

He wants revenge, but what happens next turns him into his own worst enemy. He allows himself to become blind and deaf to reason. He lets distractions divert him and anger, greed and lust dominate his emotions. What he doesn’t know is that he has passed from life to death, that he has been granted a brief interlude in which to redeem his soul.

We meet him at journey's end when he knows the truth about death and dying: when he’s learned about life after death, heaven and earth, and heaven and hell. He’s a changed man, eager to share and warn, not justify himself with lame excuses.

He tells us about the three women who seeks to control him - ruthless adversaries who play him like a beleaguered puppet from one nightmarish scenario to the next, yet every twist has its purpose.

His only hope comes from a woman he hates and fears on sight. As his time runs out, he is faced with the biggest decision of his afterlife. The question is: what happens next? United Kingdom
I like to take intriguing and unusual ideas and spin them into stories with an edge. For me, most fascinating was the chance to explore some compelling human questions, not least: is there an unavoidable bet, a wager we all have to make about what lies beyond human life? Imagine what it would be like to have all your life memories vanish, to barely remember your name. Frightening! But that's...
Learn more about Robert D Turvil