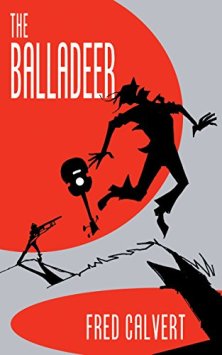 The Balladeer is Bobby Wayner, fifty, forever grieved and punished by a lie he'd told when he was a boy in Kentucky. One summer night, Eldon, his older brother was murdered. The lie Bobby had told was partly to blame for his brother's death. Bobby couldn't tolerate his guilt, so he ran away and never reached back for many years. This was during the Second World War in 1944.

Now, thirty-eight years later, after time served in California's Folsom Prison for a barroom killing, Bobby's returning to Kentucky to find out the truth behind Eldon's murder. As he travels on the roads and the rails his ballads and memories take us back to the circumstances of that fatal summer.

He and Eldon had been budding balladeers. They became intrigued with a recluse farmer called Ol' Weber, a German immigrant. Local rumor had it that he was a Nazi and that he'd murdered his own family. The boys were often warned to stay away from Ol' Weber, that he was insane. But they spied on him and discovered that at night, he played a beautiful and haunting piano tune.

Wanting to write a ballad, Eldon determined to discover some of crazy Ol' Weber's secrets. And one night he made the tragic mistake of knocking on his door.

This novel took over thirty years to get written right. I wrote the ballads first, and out of those eventually came the rest of the story. I worked hard to make it tragic, mysterious, with a few good laughs along the way. Like my protagonist, I'd always been haunted by similar events in my own boyhood back in 1944. I lived in a small town in a farming community, where some real bad things happened. The events I put into The Balladeer differ from what actually took place, but the emotions came out the same and I allowed them to serve as the story's foundation.

United States
Fred Calvert, born in a small town in Ohio, began his career as an animation artist for Walt Disney. He contributed thousands of drawings to such classics as Sleeping Beauty and 101 Dalmatians. He created programming for commercial and public television, including animation for Sesame Street and The Electric Company. He has written three live-action movies; The Rule of Three (a drama) Toi and...
Learn more about Fred Calvert