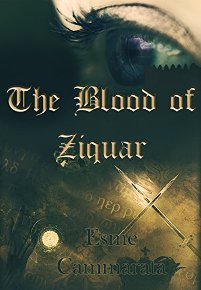 Long ago, a man named Ziquar brought magic into the world. He gifted his six children with shards of a gem, that, when united, would bring its wielder unspeakable power. Two people are on a quest for this gem. One- a madman, a murderer. The other, a young boy, by the name of Evan.
In a world where magic is just as real as the dangers, who will live? And who’s blood will be spilt?

-Esme has an amazing ability to build up suspense! She is surely the next Steven King -Cara Allan, B.A (Admin of Druidawn)

-Esme is a brilliant young mind whose dedication to the craft of storytelling shows a creative ingenuity and determination. In her writing is a door to new worlds and complex characters. As I read her suspense, I find myself simultaneously on the edge of my seat and afraid to walk into a dark room. Each time I absorb her work I discover something new, inviting, and insightful. The Blood of Ziquar is the capstone of her gargantuan effort as a masterful teen writer -Jonathan Dunsworth, Masters in education, B.A, M.

-In the village of Ostwyn, a young man with prophetic nightmares begins to learn to control his powers – but can he learn in time to save his family from the mysterious man who takes pleasure in wreaking death and destruction?
In this fantasy adventure, vivid descriptions and exciting scenes make it hard to stop reading. The two young protagonists are likeable & believable, and Cammarata uses just the right light touch in their teasing dialogue. One of her strengths is creating distinct characters who come alive, and dialogue that crackles with energy.
Well done Esme! The Blood of Ziquar is a pleasure to read, and I look forward to more from this promising new author -Heather McLeod (author)

When I first began writing, The Blood of Ziquar, I was only eleven years old. I got the inspiration, after months of brainstorming, by combining and altering the ideas of my favorite books/tv shows. I brought many aspects of my personal life and emotions into the book and based a few of the characters off of my close friends. Taj is based of Anthony, and Evelyn is based off of Elly. Rena is based off of my self ;) I hope you will give my novel a chance, I've spent two and a half years writing it and would love you so much to read it. Have a great day!
-Esme Cammarata Mueller

The Blood of Ziquar | Kindle Edition