The Deprived: Innocent on Death Row 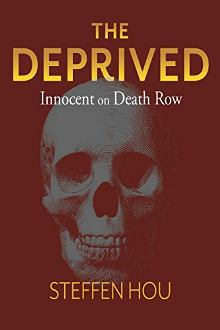 Thousands of Americans are convicted of crimes they never committed. Many of them end up on death row where inmates have been executed despite their innocence. 'The Deprived—Innocent on Death Row' is a true crime book that tells the dramatic stories of death row inmates and describes the murder cases that led to their wrongful convictions and the fact they were deprived of justice, freedom, innocence and worst case their life. The book is based on interviews with 10 Americans who have all been affected by wrongful convictions and the death penalty.

Nick Yarris tells what life is like on death row when Ted Bundy is in the cell next to you, how you survive the violence in prison without becoming a monster yourself.

Sonia "Sunny" Jacobs tells what it is like to be a woman on death row and how she reacted when her husband was wrongfully executed.

Derrick Jamison tells what it feels like to be scheduled to die in 90 minutes and why he accuses law enforcement officers of killing his mother.

Damon Thibodeaux tells what it feels like when even relatives believe you are a cold-blooded killer.

Kwame Ajamu tells what it feels like to be put in the death house as a teenager and be deprived the chance of having children.

Randy Gardner tells what it did to him when a firing squad executed his brother.

Herman Lindsey tells why he is still labeled a murderer even after being exonerated.

Ronnie Sandoval tells what it is like when your teenage son is the victim of a wrongful conviction and how she lost him twice.

Magdaleno "Leno" Rose-Avilá tells why his own past as a violent gang member turned him into a human activist.

Marietta Jaeger tells why she forgave her seven-year-old daughter's serial killer and fought for him not to be sentenced to death.

The book also investigates what leads to wrongful convictions and who's most likely to be incarcerated for a crime they never committed.

Over the years, I have repeatedly read about innocent people who have been released from death row under great media awareness and I have always been curious about how these people's lives have evolved when the cameras have been turned off and the reporters have left the prison gate.

Several times, I came across the name, Nick Yarris--a man who was exonerated by the use of DNA evidence after spending 22 years on Pennsylvania's death row.

Since his release, Nick Yarris has been one of the exonerated death row inmates who has attracted the most media attention. There has even been a movie produced about his life and he was compensated millions of dollars when exonerated. I contemplated that if one exonerated prisoner was to restore his life, it would be him.
For more than four years, I have followed Nick Yarris. When I first met him, he struck me as a person who has managed to forgive and to transform his traumatic experiences into a positive view on life. However, the better I got to know him, the more it became clear to me that as an exonerated death row inmate, you will forever be marked by the injustice done to you, no matter fame or fortune.

After interviewing Nick Yarris, I decided to approach other exonerees to find out if their experiences were similar to his. Unfortunately, they were. Most exonerees struggle to restore life. Some even say that returning to a normal life has been harder than adjusting to life on death row.

The intention of The Deprived--Innocent on Death Row is to investigate what leads to wrongful convictions and how people react when they become victims of an injustice that not only deprives them their freedom and family, but in a worst-case scenario, their lives. Do they lose the will to live, do they find meaning through religion, or do they become as evil as they have wrongfully been accused of being?

When I reviewed different cases of wrongful convictions, I was shocked by how easily people can end up on death row despite being innocent. This is often because society has failed to protect its own citizens when authorities have not conducted their duties properly or even when law enforcement officers have lied about their investigation and manufactured evidence. In other cases, the convicted has become a victim of false and vicious testimonies--even at times given by their own families and friends.

Therefore, I also wanted to investigate if innocent death row inmates can maintain trust in fellow man and that justice will prevail. Or do they become bitter and hateful toward the people who put them on death row?

Finally, I wanted to look into if the injustice they have experienced will always overshadow the joy of having regained freedom.
On a personal level, through my research, I have also tried to clarify if I believe it is fair that society demands "an eye for an eye." When I was a teenager, I saw an innocent young man being stabbed to death by a group of thugs. Witnessing the crime had a huge impact on me. I was scared and for years I feared that one day, I would become a victim. My immediate reaction was that perpetrators deserved the same punishment as their victims: death. However, I started wondering whether this was a legitimate punishment because the death penalty also kills innocent people.

I have tried to answer these questions and many others by telling the stories of 10 people who have all been affected by wrongful convictions and the death penalty.

Denmark
Author because of a disaster! Hi, I am Steffen Hou and since you are kind enough to visit my profile I’d like to share a bit of my story with you. I have always loved telling stories. As a kid I wrote my family and friends numerous letters just for the fun of it and later I decided that storytelling should also be my career. Though my desire to become a journalist was due to a sad...
Learn more about Steffen Hou