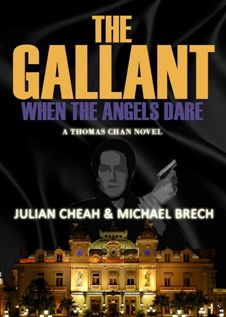 Albrecht Rademacher is a German industrialist with an evil plan to use genetics to create a virus that can be used in chemicals which will be released to kill millions of people around the world. His main henchman, Ezekiel Adarkwa, an African pirate, mercenary and killer, is a physically tough and ruthless enforcer who carries out all of Rademacher’s plans.

Thomas Chan, known to society as The Gallant for his elegance and philanthropy, is a British-born Chinese man educated at Eton College and Oxford University and was a former military and SAS member, and through a business empire and inheritance gained from his deceased parents, leads a playboy and adventurer life. Beyond this facade of wealth and glamour, he is unofficially serving the British government in helping them fight terrorism in situations where the government cannot be seen to be directly involved. Supported by a group of ten young women called The Angels whom he saved in the past, who are trained in combat and antiterrorist skills, they battle world threats.

As Rademacher and Adarkwa proceed with their plan to extort the world, they are about to face a new enemy who will prove to them that executing their mission may not be as simple and straightforward as they think and the wages of sin will soon catch up with them.