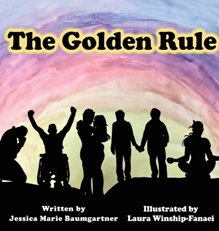 Celebrate a love of diversity and acceptance.

When a young girl learns about the different ways to express the "golden rule", she finds that every culture and faith has their own similar philosophy. From monotheistic faiths like: Christianity, Islam, and Judaism to the more philosophical belief systems like the Hindu, Wiccan, or even Atheist teachings, The Golden Rule displays our common bond with beautiful illustrations and a simple message of understanding.

Written for children ages 5-10, it The Golden Rule promotes friendship and love no matter where your beliefs come from, and is a great teaching tool for parents and teachers to help expand lessons on understanding others.

Jessica is a Pagan mother of three, whose children’s books about diversity and acceptance have received critical acclaim and multiple awards. She has written for, “Conscious Shift Magazine,” “The New Spirit Journal,” “Chicken Soup for the Soul, “Circle Magazine,” “The Witches’ Voice,” and has placed an article in an upcoming issue of “SageWoman” and “Light of Consciousness Magazine.” She is a member of the Missouri Writer's Guild, a columnist for Lit Reactor Magazine, and her new book, "Walk Your Path," was recently released by Green Magic Publishing.

Other books by Jessica Marie Baumgartner