The Graveyard Girl and the Boneyard Boy 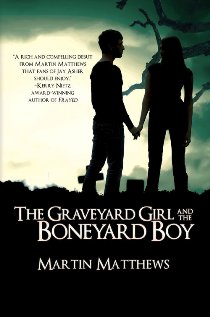 16-year-old albino Drake Stevenson lives a life alone in his world of video games and comic books, dreaming of one day saving a real princess. But fantasy becomes reality when his lawyer father suffers a heart attack, and the Stevensons are forced to move to flyover country in order to take up the family business: Stewardship of the oldest and largest cemetery in the state.

There, among the weeping angels and willows of Centralia Cemetery, Drake meets Scarlet, an unusual girl who needs his help to find her killer.

Complicated by his albinism, a mentally unstable sister bent on high school domination at any cost, and a jock with a deadly secret, Drake sets out to find the shattering truth about a murder no one will speak of, to help a girl no one can see.

The Graveyard Girl and the Boneyard Boy | Amazon

Martin Matthews is an expat from England, Great Britain. After living in California for many years, he now lives in Central Illinois with his beautiful wife, amazing son, and a grumpy, old cat named Winston.

Martin began his writing career as a child, storyboarding Sonic the Hedgehog comic books for his family. Later, he progressed to writing Star Trek fan-fiction before attempting his first novel Merlania at 16 — a 200,000 word science-fiction epic. He’s been writing novels and short stories ever since.