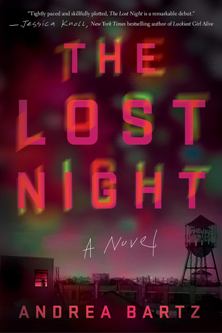 In 2009, Edie had New York’s social world in her thrall. Mercurial and beguiling, she was the shining star of a group of recent graduates living in a Brooklyn loft and treating New York like their playground. When Edie’s body was found near a suicide note at the end of a long, drunken night, no one could believe it. Grief, shock, and resentment scattered the group and brought the era to an abrupt end.

A decade later, Lindsay has come a long way from the drug-addled world of Calhoun Lofts. She has devoted best friends, a cozy apartment, and a thriving career as a magazine’s head fact-checker. But when a chance reunion leads Lindsay to discover an unsettling video from that hazy night, she starts to wonder if Edie was actually murdered—and, worse, if she herself was involved. As she rifles through those months in 2009—combing through case files, old technology, and her fractured memories—Lindsay is forced to confront the demons of her own violent history to bring the truth to light.

The Lost Night - Available on Amazon

Andrea Bartz is a Brooklyn-based journalist and author of the forthcoming thriller THE HERD, which is coming in March 2020 and has been named a most anticipated book of the year by Marie Claire, Newsweek, HelloGiggles, Book Riot, and other titles. Her debut thriller, THE LOST NIGHT (Crown, 2019), is being developed for TV by Mila Kunis. It was named a best book of the year by Real Simple, Glamour, Marie Claire, Library Journal, Crime Reads, Popsugar, She Reads, and other publications. Her work has appeared in The Wall Street Journal, Vogue, Cosmopolitan, Women's Health, Martha Stewart... more